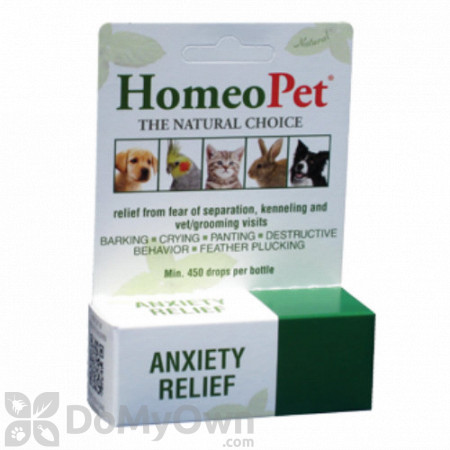 HomeoPet Anxiety Relief Pet Supplement provides a great solution to your pet's tension and restlessness caused by stressful situations. This homeopathic medicine is made of natural ingredients and it effectively relieves your pet's anxieties resulting from fear of separation, traveling, kenneling, spraying, vet or grooming visits, and other events that cause them discomfort. These stressful activities drive them to hide under the table, bark, whine, howl, cry, pace around, pant, shake, tremble, drool, vomit, poop, run away, feather plucking in birds or create a destructive behavior in other pets. This unique formula helps calm and ease anxieties of dogs, cats, birds, rabbits, ferrets, hamsters, pot-bellied pigs and other kinds of pets. Available in 15 ml container, with a minimum of 450 liquid drops per bottle.

BIRDS: 2 drops in the drinking water once daily.

SMALL MAMMALS such as rabbits, ferrets, hamsters and pot bellied pigs can be dosed by weight as for cats and dogs in previous section. For severe cases a drop can be diluted in 1 ml of water or other oral rehydration fluid and given to the patient orally, taking care to avoid aspiration of the fluid into the respiratory tract by the patient. 3 doses whose volume is appropriate to the size of the patient should be given from the diluted product over a 24 hour period, e.g. 2 drops for a mouse or small budgie, 4 drops for a large guinea pig. For acute cases it can be repeated as for cats and dogs in previous dosing section.