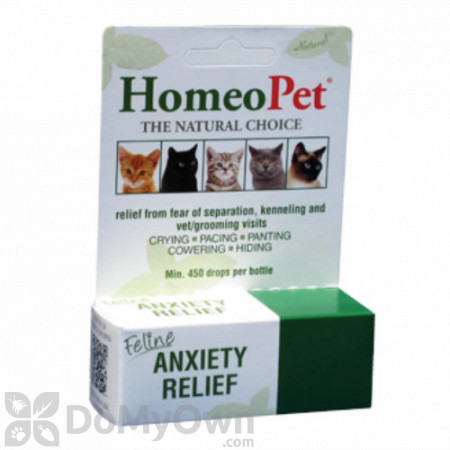 HomeoPet Feline Anxiety Relief Supplement provides a great solution to your cat's tension and restlessness caused by stressful situations. This homeopathic medicine is made of natural ingredients and it effectively relieves your pet's anxieties resulting from fear of separation, traveling, kenneling, spraying, vet or grooming visits, and other events that cause them discomfort. These stressful activities drive them to hide under the table, meow, pace around, pant, shake, tremble, run away or create a destructive behavior. This unique formula helps them calm and ease their anxiety. Available in 15 ml container, with a minimum of 450 liquid drops per bottle. Shipping weight is 0.8 ounce.

When improvement is seen, decrease frequency of dosing.
If improvement is maintained, stop dosing after 2 days. If symptoms reappear, repeat the original dose.