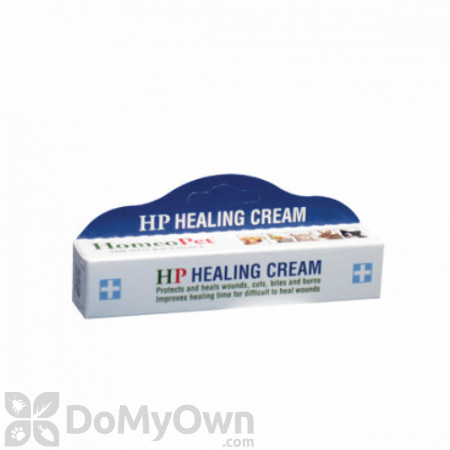 HomeoPet Healing Cream is a non-steroidal, anti-infective ointment that helps promote quick healing of wounds, cuts, bites, and burns of pets. This homeopathic topical medicine is made of natural ingredients which provide effective first aid treatment to your pets while improving the healing period of their wounds. It helps relieve pain, infection, swelling, cuts, and scratches, as well as aid with cracked skin and pads, sprains, ulcers, and bedsores. It features a chemical-free formula and has no record of any side effects so it is safe to use on dogs, cats, birds, rabbits, and other pets. It can also be used in conjunction with other HomeoPet skin care products.

Apply to affected area once to three times daily covering entire affected area. Once a response is seen, the administration should either be reduced or ceased, only reapplying should symptoms reappear.

INFORMATION ON THE COMBINATION: This combination of ingredients in its cream base provides a salve for a wide range of conditions affecting a broad range of species. It can be used as an adjunct in the treatment of septic wounds, both acute and chronic particularly in combination with antibiotic therapy where appropriate. The ingredients have been selected to have a synergistic effect and are used at levels where the product is totally safe, natural and side-effect free. It is effective in its own right, but can be used in any treatment regimen without any danger of interaction. It promotes healing, not just of the skin, but also of the deeper tissues in general. If applied at the earliest sign of change, it can be used to prevent progression to a more serious problem. The cream can be used for a wide range of problems from minor cuts and grazes, to major wounds and tears, even sunburn. The cream works exceptionally well when used externally and complemented by the use of Homeopet Trauma (First Aid), given orally for internal support.

ADMINISTRATION: Optimally, the cream should be applied directly to ulcers and large open wounds. For incised (surgical wounds), similar cut type wounds, or puncture wounds, the cream should be applied around the area. The cream is designed for compatibility with other Homeopet Products such as HP Trauma (Homepets First Aid Solution), HP Joint Relief, HP Skin and Itch, HP Hot Spot, HP Skin and Seborrhea, and HP Flea. Where wounds are cleaned by washing, for example with salt water, they should be dried well before application of the cream.

ADVERSE EFFECTS AND CONTRAINDICATIONS: None known. Although no evidence exists to the contrary, care should be taken with its use in pregnant animals as low potency homeopathics are historically not regarded as totally safe in pregnancy, despite their lack of chemicals. Should a suspected adverse reaction be seen or you want advice, please contact HomeoPet, LLC.

DRUG INTERACTIONS: None known. For animal use only. Keep out of reach of children.

PHARMACEUTICAL PRECAUTIONS: Store at room temperature, out of direct sunlight, and away from strong odors.

USER SAFETY: As with any cream product applied to an open wound, protective gloves are advised. No adverse effects have been recorded even without protective gloves. There have been reports of beneficial rather than adverse effects. As homeopathics are active in humans, care is advised when handling product, although a long history of homeopathics used in humans shows a very high safety margin.