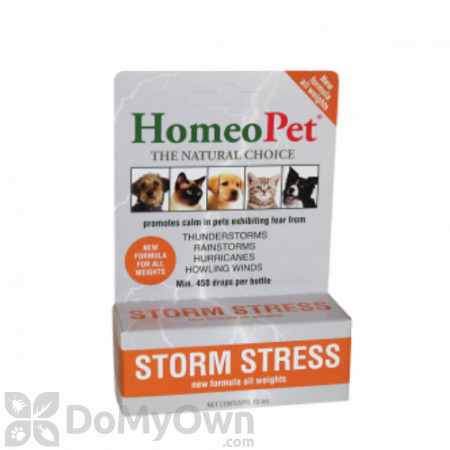 HomeoPet Storm Stress Pet Supplement New Formula for All Weights is designed to promote calmness in pets that displays fear from thunderstorms and other anxiety-inducing noise and situations. This homeopathic medicine is made of natural ingredients and it effectively relieves your pet's restlessness reHelp relieve anxieties and promote calmness in your pets that are exhibiting fear from thunderstorms, wind, hurricanes, and tornadoes.sulting from fear of rainstorms, hurricanes, tornadoes, howling winds, noises caused by fireworks, gunshots, and other blaring sounds. These stressful events drive them to hide under the table, bark, whine, howl, cry, pace around, pant, shake, tremble, drool, vomit, poop, run away, or create a destructive behavior. It features a chemical-free formula and has no record of any side effects so it is safe to use on dogs, cats, birds, rabbits, ferrets, hamsters, pot-bellied pigs and other small animals. This new formula treats animals of all weights. Available in 15 ml container, with a minimum of 450 liquid drops per bottle.

Begin dosing as soon as anxious behavior starts.
One dose (10 drops) every 15 minutes up to 4 doses if needed.
Dosing may be repeated as recommended above for multiple storms or stressful situations throughout the day. Remedy may be dropped on food/treat, directly into mouth or in water.

Pets less than 2 lbs, dilute 1 drop in 1/4 oz water then give 1-5 drops of medicated water dependent on size of pet or mist the air for treatment by olfaction (inhalation), especially useful in frightened pets difficult to medicate or those sensitive to the alcohol preservative.

PREVENTION WHILE OWNER IS AWAY:

15 drops of product may be put in water bowl for each dog/puppy who is home alone during storm season or similar events. Discontinue treatment as condition improves.
Dropper is specifically calibrated so that each drop is identically medicated.
Remedy only needs to be used while pet is anxious, discontinue once pet is calm.

Optimally, the liquid preparation should be dropped directly on to the mucous membrane of the mouth including lips; ideally in dogs by pulling out the labial pouch, and in cats by raising the head until the mouth opens. Where an animal finds this distressful or an owner is unable to comply, the medication can be put in the food, water or milk. Where animals are sensitive to the odor of the alcohol preservative, a 10-20 minute period should be allowed for dilution and evaporation before the liquid or food is presented to the patient. Occasionally, animals will shake their heads as a response to the alcohol preservative; cats may salivate excessively and in these cases presenting it in food, water, milk or aerosol works.

None known, other than reversible effect of overdosage. Overdosage will result in a return of symptoms after the symptoms have initially disappeared. Where a return of symptoms occurs while on the medication, ceasing to use it will alleviate the effect. Patients who are hypersensitive to homeopathic preparations will show response to a single dose, which may not need to be repeated for some time. For this reason, therapy should always start with a single dose the previous day and should a major response be seen, therapy should not be recommenced until symptoms relapse, and then only a single dose given for maximum effect. Although no evidence exists to the contrary, care should be taken with its use in pregnant animals as low potency homeopathics are historically not regarded as totally safe in pregnancy, despite their lack of chemicals. Should a suspected adverse reaction be seen or advice needed, please contact HomeoPet, LLC.

None known. For animal use only. Keep out of reach of children.