The time has come to put down our second round of our class one fungicide in our fungicide rotation program. We will also be discussing future plans for aerating and overseeding the turf at DMOHQ! There are some things to consider when looking ahead at future projects, and that is exactly what we will discuss in this video! 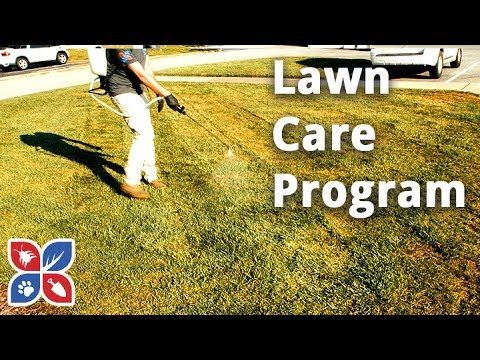 How To Get Rid Of Doveweed
VIEW ALL

So it's time for round two on our class one fungicide. I'm going to put that down today, but before I do that, I wanted to just kind of give you a follow up on everything that we've done so far.

That Doveweed application is starting to really take effect. I'm starting to notice some yellowing and browning going on in that. So, it's working. I'm pretty sure I'm going to have to put down a second application but we'll talk about that a little bit later.

Nutsedge, pretty much taken care of. It's all burnt off. I'm not noticing it anywhere in the turf. So, I think we've pretty much got that under control.

Honestly, not quit sure what all was mixed in right here with the Doveweed, but you can see that that application of herbicides that we did in the Doveweed video is doing a good job of not only taking care of the Doveweed but a lot of the other weeds that were kind of just mixed in here.

We've actually gotten a really nice break in the weather. It's been really cool in the mornings here in Georgia. We've been in the high 60s to low 70s, so I'm going to take advantage of that and go ahead and get my second application of our class one fungicide down. So I'm not going to bore you with mixing, so cue the montage and music.

Round two of our class one fungicide is done! The first round that we put down did a really good job of stopping the disease in its tracks and I really haven't noticed it spreading to anywhere else in the turf, but I do know that it's still there. We've noticed that it's still pretty present, which is why we hit it with another curative rate of that class one fungicide.

From here, we'll rotate to our class, I think eleven is what we're planning on using and we'll go at a mid rate. We're not going to use the lowest or the highest. We'll go in between those two. Put one application of that down and then just reassess see where we're at with our disease and go from there.

Alright so like other people who are nuts about lawn care, I like to physically write things down on paper because, I just, I don't know. I retain it better. So, here we are in July, this, July 11th, is when I made my first application of our class one fungicide. And I had to count out 14 days to today, when I made my second application of my class one fungicide. And in between there, as you can see on the 19th, is when I did my first round for the Doveweed.

And again, I preach this in the fungicide rotation video, we do 14 days in between our applications, depending on the fungicides that you're using. It's roughly 14 days. So if I count out 14 days from today, when I made this video, July 25th, that's going to put me to August 8th when I should be making my first application of our class 11 fungicide at the mid rate.

Also on the label of the post emergent that we used for the Doveweed it says we need to wait three weeks after our application before we can think about our consider doing any kind of reseeding or overseeding in our turf here at DMO headquarters. So if we count out three weeks from August 18th, that's going to put us roughly into the first full week of September. So September 8th, around then is when we're clear to do some overseeding.

So why am I doing all of this? Why am I writing it down? Why am I telling you this?

And because we are talking overseeding, that means fall is right around the corner, although it doesn't seem like it because it's still, like I said, today we're getting up to a high of 95 and the humidity is like 70 or 80,000 percent.

That's the joys of shooting lawn videos in an office park. You got to, you got to contend with these truck drivers.

Alright, so I hope all that made sense. I know I kind of rambled and, yeah, I hope you followed along with all of that. If you didn't and you, and...and I just confused you, let me know in the comments section below and I will try and clarify that and we'll spell it out better for you.

So that's where we're at. We're going to do a second application of the post emergent herbicide to take care of our Doveweed problem, and then the next major step is aerating and overseeding.

If any of that didn't make sense and I just lost you, sound off in the comments section below on any questions that you might have lingering in your head after listening to me ramble for however long this video is.

Like always, links to all the products are in the description box below so you can click over to Do My Own dot com, read more about them. And if you have any other questions on anything that relates to lawn care that we can answer for you, leave those in the comments section below, email the customer service staff or pick up the phone, give us a call.

If you're not already, click that button right there to subscribe to our channel, you can click that link right in here to watch the most recent episode in the lawn care series, and if you want to watch from episode one, click that playlist right there.