After three weeks Fastrac has not worked at all, would it be prudent to try another type of bait?

I have used fastrac in two sidekick and 1 protecta station for three weeks.The bait has been changed,kept fresh and placed according to istructions however, it has not been touched . The rats seen are increasing in numbers. I have had some luck with the T-rex system, using peanut butter (catching 3 rats) But they are not taking the bait. What else can or should I be doing??

Fastrac is one of the best rodent baits on the market because it is highly palatable and has a fast kill. If the rats aren't taking this bait it is unlikely they will take any other solid bait. It is important to load the stations with bait, place them in high activity areas and then leave them alone for a couple of weeks. Rats do not like new things and they will often avoid going near stations that are disturbed often. You should also try to remove alternate food sources so that the rats will have to feed on the bait. This can be tricky in some situations but is a very important step when implementing a rat control program.

11 of 14 people found this answer helpful. 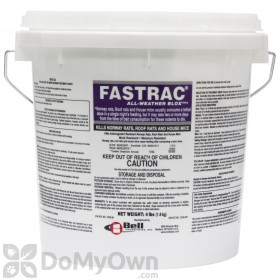