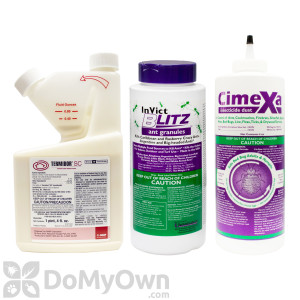 Free Shipping!
What are Crazy Rasberry Ants?
Crazy Rasberry Ants are a new invasive pest species first identified in and around Houston Texas in 2002. Since that time the infestation in Texas has grown encompass 11 counties and are a real problem for homeowners. These ants have not been identified to species but are commonly called crazy Rasberry ants after the exterminator who first noticed them.

How to Identify Crazy Rasberry Ants
· They will show up in extremely large numbers, even millions to billions
· Ants are uniformly sized at about 1/8 inch and reddish-brown in color
· They do not form trails but instead move about rapidly and erratically
· They seem to have an unexplained attraction to electrical equipment such as computers, hair dryers, and air conditioners. In some instances large enough numbers have accumulated to cause short circuits and ultimately equipment failure.

Crazy Rasberry Ant Nests & Colonies
Crazy Rasberry Ant nests are can be found underneath or inside of practically any object or void including soil, concrete, stumps, potted plants, etc. and especially objects containing moisture. Nests usually occur outside with worker ants foraging inside homes and buildings.

How to Get Rid of Crazy Rasberry Ants
Termidor SC is the answer to controlling crazy rasberry ants. An exterior above ground spray one foot up and one foot out is all you need to knock out ant colonies trying to invade your home. Buy Termidor now or learn more about Termidor and read product reviews.

13 of 14 people found this article informative and helpful.