Do My Own Gardening - How to Prevent Birds from Eating Tomatoes

Things were looking really good in the garden. No real disease problems to worry about and the fruit is still ripening really well. That all changed when we noticed a small problem that we did not plan on, birds! In this video, Paul will talk about the ways to prevent birds from eating your fruit as well as how to pick peppers. 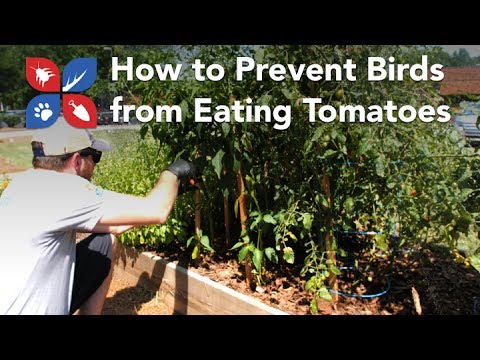 Everything was going good, but then...well let me just show you.

We've had a lot of severe thunderstorms roll through here which has caused our support structures and tomato plants to kind of topple over; giving us a little bit more shade on our pepper plants than I would like but, it is what it is.

We already covered disease problems and we don't really have anything to be to concerned with. We're showing some signs of Septoria Lead Spot, but it's nothing to really panic about.

We also covered the four most common pests you're going to find in a raised garden bed, especially as they relate to tomatoes. But one that we didn't talk about and honestly weren't expecting until it literally swooped in stuck it's nose in our business...birds.

You see we try to make a habit of coming out here and checking up on our little garden, do a little bit or maintenance, and just seeing how things are, and that's when we noticed a small little problem with a couple of our early girl tomatoes. Let me show you what's going on.

These are just a couple of the early girl tomatoes that the birds have swooped in and started pecking for their consumption, creating holes, and a problem. Not cool birds.

Fortunately they only got those two tomatoes and we still got some good clusters on here that are ripening, so I think we got it just in the nick of time.

So, after doing a bit of research, I've found that there are a ton of different options out there for keeping birds out of your garden.

You can use scare tactics, constructing a scare crow or buying a fake plastic owl to put in the garden which will scare off the birds. There are some high tech options which will detect when a bird gets near or lands on the garden and set off an alarm or a loud noise which should scare the bird away.

But the cheapest and probably the most easiest solution, is throwing a re-usable plastic net over the entire garden. Tried and true! Plastic netting is a proven method to keeping birds away from your garden and eating your fruit.

Before using the netting it's best to build some kind of support structure for the netting to get draped over so you don't risk snagging on your plants and breaking off branches and causing damage that you don't want to do.

Fortunately, I work with some pretty awesome co-workers. They saw the problem and they got the netting. They cut it and draped it over the garden for me. I just couldn't get to it. Sorry guys. Thank you though. You guys are awesome!

Now in order to keep the netting in place, you can use large rocks and place them on the netting that's on the ground to hold them there. Or you can drive in separate stakes to just kind of stake them down into the ground around the box. But whatever you do, make sure you can still gain access to the garden, to maintain it, pick your fruit, all that good stuff.

Let's see you get through that birds! No more tomatoes for you.

Other thing we got to do today is harvest some of these peppers. They're rip for picking, so let's get to it.

Now the actual harvesting of peppers is going to vary. It all depends on the types that you have. Most sweet peppers are going to mature in about 60 to 90 days while most of your hot peppers will take upwards of 150 days to mature and harvest.

Grab some hand pruners, or scissors, or a sharp knife and actually cut them off the plants, closer to the main stem. Also when picking peppers, make sure to wear gloves; especially if you're picking hot peppers.

Last thing you want to do is go in there, grab some hot peppers with your bare hands, get the oils on your fingers, go to rub your eye, and next thing you know it feels like your eyeball's going to explode. Don't do that. Avoid it, just wear gloves.

Now I'm no expert but I would say this is a pretty good yield of peppers out of our little garden. We've got a few lunch box orange. We've got some Poblano and Jalapenos, and we've got quit a few Serrano Peppers. Success!

So there we go. Wanted to make a quick video touching on our pesky bird problem that we're having and what we did to solve it, as well as go over how to pick peppers in your raised garden bed.

Still waiting on those early girls to ripen up so that we can enjoy those but we're getting so close but yet it seems so far away.

Hope you found that helpful. If you have any other questions as far as what we've covered in this video, you can leave them in the comments section below, email the customer service staff or pick up the phone and give us a call.