Do My Own Gardening - How to Sow Seeds Indoors

In this video, Paul shows you the step by step process we used to plant our seeds and the products we used to do so. 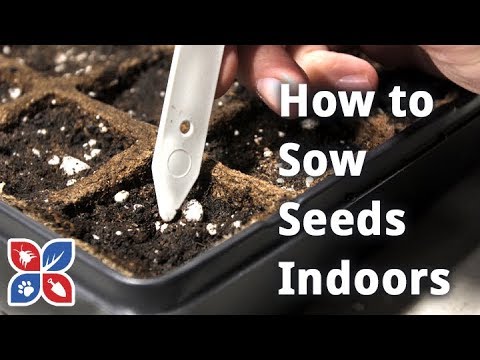 And that is just after one week!

So a couple of take aways so far. First of all, our cell flats on the top right here, they were drying out quicker than we wanted them to. Which is why this cup is right here marked with a date and time. We filled it to that mark and kept an eye on it. We felt like maybe it was the light that was causing the moisture to evaporate quicker than we wanted it to.

Sure enough, it was. The light on the bottom and our cell flats down there were doing really well, and we thought, ok, maybe it's because it has the sufficient amount of light that it needs, so we dialed the light on top, back, to match the light on the bottom. And so far so good. We're not loosing as much moisture as we were before, when the light was dialed up really high.

Alright, so let's talk about this process, go through it step by step of how to get these seeds started inside of a grow tent.

So first thing we did was set up a table to put our trays on. After that, place the planter trays or the cell flats onto the table.

Then either using a watering can, or, in our case, a plastic cup with holes punched in the bottom of it to slowly soak the soil. And we really want to soak it. We want to get a lot of water in there so that we make sure that that soil is nice and moist.

After soaking the soil, if you excess water in your tray, do one of two things. Either drain the water from the tray or, if you plan on putting the tray on a heating mat, move the tray back and forth to even out that amount of water in the tray. That heating mat will cause the water to evaporate out of the tray for you.

Now it's time to actually sow or plant the seeds. What we're going to do is lightly create a hole to place the seeds in the planter cell, then back fill the soil over the seed.

One thing that you want to do is make sure you read the packets of your seeds because it should tell you how deep you should actually plant them.

After all your seeds are planted, you want to go back through and lightly water each cell.

Then we're going to place the dome back on the cell flats and place those cell flats inside of our grow tent, under out lights.

And now we just wait! That's...that's the boring part. Lady bug was dragging this across the yard.

Hey! They're making a cameo in the video!

Much better! Now, it's official!

If you want to know more about the soil or anything else I used in this video, I'll leave a link in the description box below so you can click over to our website at Do My Own dot com and read more about those.

So that's pretty much it for this one. If you have any other further questions on anything we touched on in this video, as always, leave those in the comments section below, email the customer service staff, or pick up the phone, give us a call.