Do My Own Lawn Care - Cool Season Grass Disease

The lawn at DoMyOwn.com headquarters has it's share of problems. One of those is a disease problem. Leaf Spot Disease to be exact. In this video, Paul will go over his plan to get rid of the disease as well as discuss plans to rehab the lawn. 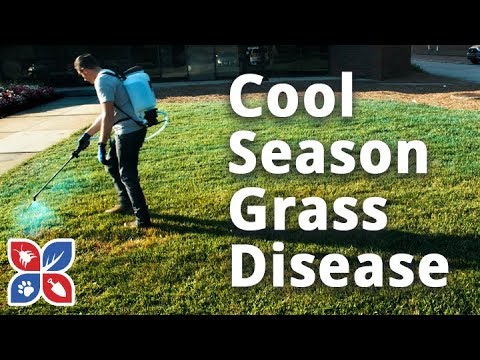 How To Fix Lawn Damage
How To Get Rid Of Doveweed

For those that were wandering these are not dead geese. They're decoys which do a really good job of keeping the geese out of here and crapping all over our yard.

Alright, so we're tackling the next problem on our list here in the lawn at DMO headquarters but before I get into what that is and how we're going to tackle it, let's do a follow up on our nutsedge problem.

So check it out. It's starting to yellow and we're starting to get good control of the nutsedge here in our turf type tall fescue. It's been about a week since that first application. And usually by now you would see it towering above the turf. But that's not the case. Like I said, it's starting to yellow and it's not growing as much. I'm positive we're going to have to come back here and hit it with another, possibly two, maybe even three more applications so that we can get all the way down to the nut-lets and destroy those so that it won't come back.

So on to the next problem that we're tackling here in our lawn. We have a disease problem, so we're going to have to start a fungicide rotation program to get rid of it. And let me see if I can find an example of the disease that we're trying to tackle.

Alright so in here's a pretty good example of what we're dealing with. Let's see if I can get some of this up. There we go. That's the problem that we're tackling today. Right here's probably a better example of it. There ya go. See if I can get that in focus. Boom. Pretty sure this is leaf spot so this is what we're going to be treating for here in the turf type tall fescue.

And because it started out at 72 degrees when I left my house this morning and got all the way up to 80 by the time I got here to the office, yeah, I'm going to go ahead and get to mixing and spraying and then we'll dive into all the details after.

And done. It's also climbed about five more degrees since I first started, so, thanks mother nature.

Alright so let's dive into leaf spot and talk about what it is. It's a casual fungi that first invades the leaf blades and produces a small brown spot. And as the disease worsens those spots on the leaf blades, they'll expand and produce kind of dark purplish red oval kind of shapes around a tan center.

And they'll keep expanding until the entire leaf blade is blighted. Now the actual leaf spotting or leaf blighting as it's known isn't the worst of it. That's not the most severe damage. What you really need to worry about is what's known as the melting out phase.

In the actual melting out phase of the disease the crown and the root actually starts to get damaged and that's what causes your turf to get thinned out and just start to look terrible.

And this disease is tough. It can actually survive winter in the crowns and roots of the turf grass, in can survive in turf debris, and it can even survive in the soil itself. And it will actually get activated in the cool wet weather of spring. So you're looking at April to early May is when it will actually start to turn up and cause problems in your turf.

Spores are going to be produced by the disease on leaves and they're going to get released by either rain water or irrigation water to newly emerging leaf blades which in turn will cause leaf spot on those new blades.

And you're really going to see it start to take off about mid to late spring. And when late spring and early summer roll around, that's when the spores wash down to the crown and root areas, causing the melting out phase of the disease and again, once you get to that point, the turf is going to start to get thinned out and just start to look like crap.

Another thing to know about leaf spot disease is it's not just a spring problem. During the late summer, all grass species are susceptible to this disease. Kentucky Blue, perennial rye, Tall Fescue, Bent Grass, Fine Fescues, all of them can be effected by this leaf spot.

Now it's really hard to predict when this disease is going to take hold of the different grass types that I just listed and all the other ones that it effects, so you really just have to keep an eye on your turf while you're maintaining it and if you start to notice a problem, jump on it immediately.

Now something that's really going to fuel the problem is if you put excessive nitrogen down in early spring. And on the other side of that, if you have a nitrogen deficiency that can also open up the turf to this disease. So  you've got to try and find the middle of those two and get the right balance of Nitrogen in the yard so that it's healthy and does not open itself up to the leaf spot problem.

Now the best way to control leaf spot and any other kind of disease is to put down a fungicide like what we've just put down in our turf type tall fescue. Correct application and timing are critical when it comes to controlling disease in the turf. So, again for our turf right here, the turf type tall fescue at DMO headquarters, we did a curative rate, which means we went at the higher fluid ounce rate per 1,000 square feet, with the class one fungicide that we just put down.

Now, the best way to tackle a disease problem, like we've already preached in previous videos, is to do a prevention versus a curative. We want to stop it before it even happens. But, it's already here. So again, we've just got to attack it with that curative rate, and we're going to apply it at 14 day intervals. So we did our first application with this class one, we're going to wait 14 days, do a second application, and then 14 days later we're going to hit it with probably a class 11 fungicide and we can probably lower our rate by then. Will apply that, we'll wait 14 days, do another application of that class 11 and just kind of asses and just see where we're at. Hopefully by then, we'll have the disease under control, but we'll just have to wait and see.

So we got our first application of our class 1 fungicide down, and uh, we're just going to wait 14 days from here, do our second applicationniot and just really get on our fungicide rotation program and try to get this leaf spot disease under control here in the turf, but that's not the only problem we got, we have more!

The nutsedge problem we're already on but it's thinned out really bad here.

We've got a pretty amazingly awesome doveweed problem going on in the whole turf but mainly along the side walk here.

We've got Bermuda mixed in with our turf type tall fescue and even more doveweed.

And even more Bermuda and doveweed. Look at this. All that right there. Doveweed!

So, yeah. I'm going to take it over from here with the help of our customer service staff and we're going to rehab this lawn. It just, it just kills me to see it like this. We're going to try and restore it to it's former glory and get this thing looking immaculate.

What's going to be really fun and challenging about it, is this is a cool season grass in a warm season zone. So it's going to be  an uphill battle, but I love a good challenge.

So next step, come back out here, tackle our nutsedge problem again. Probably do another blanket application with the herbicide we used in that video. I hope I can tackle the doveweed problem at the same time. I don't know. I've got to check up on that. Check in with the customer service staff, see if we're cool to do that. But, yeah. Let the fun begin.

So that's really it for this video. If you have any more questions on leaf spot disease, leave those in the comments section below. If you want to know more about the product that I mixed up and used for the leaf spot here in this yard, I'll leave the link in the description box below or you can click that little "i" i con in the upper right hand corner of the screen to go over to Do My Own dot com, read more about that.

You can always email those questions over to the customer service staff, or you can just pick up the phone, give them a call.

And if you're not already, subscribe to the channel by clicking this button right here, you can click this link to see the most recent episode in the lawn care series and if you just want to watch them all from episode number one, click this playlist right here.