Do My Own Lawn Care - How to Dethatch

What is thatch and why should you worry about it getting rid of it? Paul explores the answer to those questions as well as go over other tips when it comes to dethatching your yard. He will also go over some of the equipment you should use in the process. 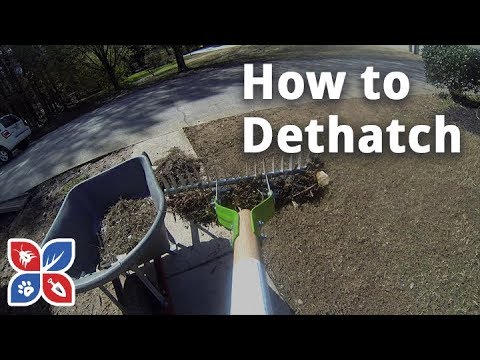 It's just to much fun!

See all that brown and black stuff? That's all dead moss. That moss killer really did a good job with kicking its butt. But I wanted to hold off on ripping the rest of it out because I'm going to incorporate that with another step that you should consider in your rehab program, dethatching!

But what exactly is thatch and why should we worry about getting rid of it?

A half inch to three quarters of an inch of a thatch layer is actually OK, this much can help insulate against temperature extremes and fluctuations in the soil.

The other benefits to having thatch in your yard is it can slow water loss. It also will cushion soil, and decrease composition, helps improve turf tolerance against foot and mower traffic, just really kind of strengthens it up!

The cons to having thatch is it prevents water, fertilizers, or insect and disease control to get down to the soil. It can also block sunlight to the lower portion of the grass blades.

Though thatch is natural, there are some things that could cause it to build up. Over fertilizing with to much nitrogen can cause a thatch build up, as well as over watering, or mowing to high, and heavy clay soil. Which is what good old Georgia dirt is!

Now that we know what thatch is, we have to ask, do I have to dethatch?

One of the things that you can do is walk across the lawn. If its spongy or bouncy under your feet, and feels kind of springy, you need to dethatch.

Simply examine your lawn. If you can't see the soil, your most likely looking at thatch, and you need to dethatch.

If you can't push your finger through the thatch layer, it's to tough, and needs to be thinned, you need to dethatch.

You can measure! Dig a small portion of your lawn with a spade shovel, like we did in the soil sample video, measure that, look at the thatch layer directly on top of the soil, if it's thicker than three quarters of an inch, you need to dethatch!

For smaller yards with less than an inch of thatch, you can use a specialized rake.

Special thatch rakes like this one will have sharpened tines that will help lift the thatch away from the soil. Manually dethatching like this will also cause less stress on the yard and all you gotta do is use the same motions as you would with a traditional rake. If you're doing it right, you'll actually feel the thatch lifting up from the soil.

Now if you think you've got more than an inch of thatch, and manually doing it isn't your cup of tea, you can go and rent some power equipment.

The equipment you're going to rent is called a versa cutter, or a verti cutter, or a power rake. Similar to what we used in the moss video.

These machines have vertical blades or wired tines that are going to slice into the thatch and lift it up out of the lawn for you.

Now they are heavy and it takes a bit of muscle to maneuver them around, but if that's the route you're going to go, I believe in you! You can do it!

I personally don't feel like spending another seventy five bucks to rent a power rake, I already did that for the back yard. So I'm going to use the thatch rake and do it manually. Cue the montage and music!

Probably can't tell much on camera but I see a very big difference in the yard after dethatching it. I see the soil level and the yard just looks cleaner, and looks like it can breath better.

The lawns going to look pretty beat up after you dethatched it. Just make sure to water it so that it can recover and also make sure to rake and remove any of the thatch that you pulled out. You can either compost this s you can use it for mulch later, or, like me, I just bagged it up and threw it away.

If you made bare spots in the yard, just note where they are and reseed those spots later one.

A couple of other quick little tips when you're going to dethatch. If you have sprinkler heads or you have termite bait stations, or other hidden objects like that, mark where they're at so that you don't accidentally destroy them in the process.

When using a thatch rake, you don't have to man handle it! You just use it just like you would a normal rake. The sharpened tines will dig into that thatch for you and pull it up off the soil and then you just have to simply pull that thatch off and dispose of it however you choose.

A power rake is most certainly quicker and easier but I found it some what therapeutic to do this manually. Guess I'm weird like that!

Now if your thatch is pretty mild, plug aerating might be enough. Aerating will dethatch the lawn for you when the plugs are removed and it will also avoid creating bare spots in your yard. That's probably the method that I'm going to use for the back yard.

Pretty sure I hit and covered everything when it comes to dethatching. I'm sure there's something that I missed and if you have more questions, leave them in the comments section below or shoot our customer service staff an email, or pick up the phone and give them a call!

I hope you found the video helpful. Hit the thumbs up if you did! Please subscribe to the channel by clicking this button.

And also you can click this playlist to see all of the other videos that we've done in the series so far.

I'm having tons of fun doing this for you. I hope you're learning and I hope you'll continue to follow along with me as I Do My Own Lawn Care!