Sometimes, weeds are just unavoidable. You can put down a pre and post emergent at the start of spring and going into fall, stay on top of your mowing, and even pull them by hand, but every now and then, they creep their way into your yard. In this video, Paul will talk about a weed that has been popping up in his Turf Type Tall Fescue in the back yard. That weed, is Virginia Buttonweed! He will go over how to identify and get rid of it! 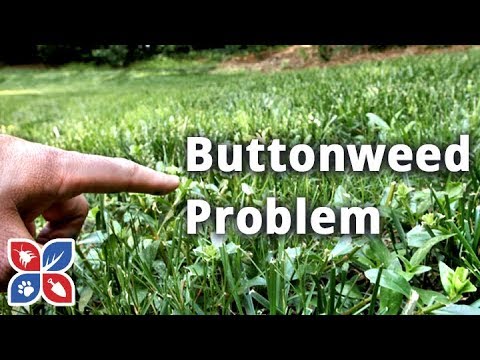 Understanding Fungicide Resistance
How To Get Rid Of Tree Suckers

Got ourselves a nice little problem going on in the back, which is why we have our backpack sprayer allmixed up and ready to go. But before I do that, let me show you what I'm talking about.

Beside the lawn being just really thin, which you probably noticed in the last video, and I'm really anxious to correct that problem, but that's going to come in the fall time when I go to top dress and overseed back here. You probably noticed these little guys popping up right here. This nice little weed all throughout the back yard right here. And that weed is Virginia Buttonweed. So let's talk about that.

And full disclosure here, I did not identify this all on my own. I took a bunch of photos on my cell phone, showed them to the customer service staff because they're the real experts. They're the ones that really pin pointed this weed, and yeah, good job to them!

Yeah, I know. I've got marking dye on my finger. I wore gloves when I mixed it up, but, it's just that messy. I like it but it's messy. Just so you know. It will wash off eventually but is what it is.

Alright so on to Virginia Buttonweed. This weed is a problem primarily in transition zones and warm season zones like down here in Georgia. It's a creeping, spreading- perinnual weed that will cover large areas over a short period of time.

It not only produces seeds but it also spreads through root systems called rhyzomes. So it creeps under ground and pops back up into a new area.

Another way that it spreads is when you mow the lawn, it breaks off pieces and if you're not bagging your clippings or you leave some behind, it can re-establish or replant itself into the ground. Which will continue the spreading of the weeds, so you can see why it's so difficult to control.

So how you can tell it's Virginia Buttonweed, is that on the top side of the leaf, it's usually dark green and then on the lower side, it's going to be a light green. Another way that you can tell, and it's not really picking up here on camera, but the branch stems are usually hairy.

Picking this weed by hand is not really going to get rid of it. Really the only best option I have is to mix up a post emergent, which we did at the beginning of this video, and go through and spot spray it. Which brings up another point and a tip that I wanted to throw out there for you, at this time of the year when the temperatures are getting up into the high 90's which they are and it's just lovely. We recommend that you avoid doing blanket applications with a post emergent if at all possible.

When the temperatures are in the 90's like we have here in Georgia, you run the risk of damaging your turf if you go through and do a blanket application with a post emergent like what I mixed up. So what I'm going to do is I'm going to go through and just spot spray all these different parts of the yard where the Virginia Buttonweed is present.

And I'm even going to half the rate of my post emergent for the same reason. I don't want to damage my turf type tall fescue back here because it's all ready a little bit stressed because of the high temperature and the heat that we're getting. I'm going with a point five ounce per gallon instead of the full ounce per gallon that I typically do with this post emergent. I mixed up about two gallons, because I've got weeds here in the back and I've got a few in the front that I'm going to tackle as well, so, time to get to it!

Done! Nothing to it!

So that's really it for this one. I don't know how long this video is going to turn out to be, but, I just noticed the problem, I wanted to identify it, show you how to identify it, maybe you've got the same weed growing in your yard, and talk about how to take care of it. So, this should knock it out of the back here. We'll just wait and see. I'll do a follow up on it and show you how well this post emergent kicked this weeds butt!