When you first see it, it will make you think you have the most beautiful yard in the neighborhood. In all reality, Poa Annua, also known as Annual Bluegrass, is a very common weed that can be tough to get rid of. In this video, Paul will go over how to get rid of Poa Annua in his own yard! 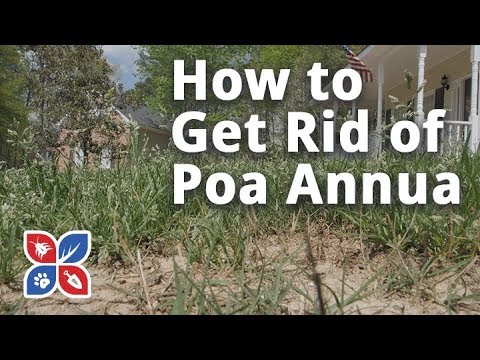 It's been awhile since that's made an appearance!

Upon first inspection, it looks like we're making some really good progress and we've got some good green up going on. But looks are deceiving and we've got a problem.

Now I've got to admit, when I first started seeing it, I thought man this is awesome! The yard's starting to green up, I'm starting to see some results! YES! Looking good. But upon further inspection, things started to look a little suspicious.

As it started to get thicker and taller, these little white seed heads cane with it. And I knew it wasn't Bermuda but I couldn't pinpoint exactly what it was. So I took some really high res pictures on my phone, sent it over to the customer service staff, to see if they could identify it for me, and they did. And it is Poa Annua!

Not only are the looks deceiving of it, the name's deceiving as well. It's not grass, it's an annual weed that is pretty common in most yards. And you can also find it scattered through some gardens.

It's a pretty difficult weed to control because it can produce hundreds upon hundreds of seeds in one season. And those seeds, they can lay dormant for several years and not sprout up right away.

Now in talking with the customer service staff the identifying characteristics of Poa Annua grass, is that it's a tall tasseled seed stalk that will typically stand above the rest of the lawn and becomes visible in late spring or early summer.

Now while the seed stalk can be pretty tall, if you cut it short, it can still produce seeds.

Now Poa Annua grass in the yard can be a problem. It can die in hot weather and it will leave very unsightly nasty looking brown spots throughout the yard.

It also thrives in cool weather. When most grasses and lawns start to go dormant, that's when it chooses to invade.

Poa Annua germinates in late fall and early spring, so our timing of trying to control it is pretty critical.

Now most people who know what they're doing...

That's most certainly not me!

...will apply a pre-emergent in early fall and again in early spring to really gain control of Poa Annua. That will help prevent the seeds from sprouting, getting into the soil and really germinating and taking over your yard.

But Poa Annua seeds are pretty tough. They can survive without germinating for many many seasons. By using the early fall and early spring pre-emergent applications, that will help control Poa Annua over time.

But keep in mind, you're going to have retreat the yard many seasons to completely get rid of it in the lawn. There are, however, specialty herbicide products that will help kick its butt in the here and now. And that's exactly what I'm going to do.

Again, ignore all the bare spots but the question we have to ask is to cut or not to cut it down and then spray. And the answer is, according to our customer service staff, don't cut the weeds before spraying them. Reason being, they're thriving and they're growing right now. And if you scalp it down and cut it, you'll stress it out and it will be less likely that the herbicide that we're putting down will be absorbed into the weed.

Now the product I'm going to be using is a WG. A water soluble granule. And all that means is, its in granule form and when you add it to your tank and put water in there, that granule breaks down and dissolves and gives you a finished solution.

Now the herbicide that I'm using is an herbicide control for certain broad leaf, sedge, and grassy weeds in turf. I'll leave a link in the description below so you can click over and read more about it. But, we're mixed up! We're ready to go! Let's do the dance!

Meaning the herbicide, weed control dance. Well you know what I meant. Let's do it!

So there we go! That's how to get rid of Poa Annua Annual Bluegrass in the yard. Or at least start to try. It's a tough weed to control and kick out of the yard and this isn't the first bout I'm going to have with it.

But just like everything else we've done so far, it's an on going process and I don't mind putting in the work.

Per the label and our customer service staff, I've got to let that sit for two to three days and go to work on that Poa Annua before I go to mow it down.

To be on the safe side and make sure this stuff really goes to work, and so long as my H O A is on board with it and doesn't give me a nice little letter in the mail, I'll probably wait about a week from now to get the mower out and cut it down.

Just like the moss in the back, this is only the beginning of controlling the Poa Annua in the yard.

I hope you found that helpful and we answered some questions when it comes to Poa Annua, if you have any more, leave them in the comments section below, shoot the customer service staff an email, or pick up the phone and give them a ring.

Make sure to subscribe to the channel by clicking this button. Click this playlist to see everything we've done so far in the yard.