How to Use Catchmaster 100i Insect Monitors

Catchmaster 100i insect monitors make it easy to check for pests or monitor progress after a pest control treatment. The perforated boards have a food-grade molasses to attract and catch insects. 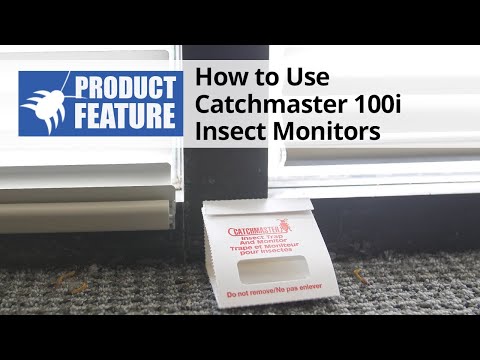 Catchmaster 100i Insect Monitors (Pack of 4)

Catchmaster 100i Insect Monitors make it easy to determine if you have a pest problem or to monitor your progress following a pest control treatment.

Using a food-grade molasses and an adhesive to attract and catch nearby insects, each Catchmaster 100i board is perforated, making it easy to divide into three smaller monitors or use the board as one large trap.

The boards can be used as is or folded into triangular monitors. Folding the monitors will help keep dust off the glue pads and prevent children and pets from touching the glue, while still allowing pests to be captured.

To assemble the monitor, separate each board along the perforated lines to create three smaller boards. Fold gently to create a triangle shape, with the Catchmaster logo and window on top. Remove the adhesive covering on the angled top, then firmly press the panel to the adhesive to create a secure trap with three openings. Then, carefully remove the interior paper to expose the glue surface inside the trap.

Place the insect monitors in rooms that have been treated for pests or in which you suspect you may have a pest infestation. Monitors can be placed in the corners of rooms, behind sinks, under desks, against windows, and near utility pipes. Place near or in food storage areas, like pantries and cabinets, or in other spaces where pests are likely to travel.

An adhesive backing on the Catchmaster 100i insect monitors allows you to place monitors on walls, ceilings, within drawers, and even upside down. Remove the paper from the adhesive and press the monitor firmly onto a clean, dry surface to secure the traps in place.  The adhesive should last for at least one year unless the monitor is subjected to intense heat or cold.

Check monitors every week, and replace monitors as they become full, or every two to three months.

Monitors should be kept out of the reach of children and pets. If something sticks to the glue boards that is difficult to remove, such as hair, use a non-stick cooking spray or vegetable oil on both the object and the glue board until the object is removed.

Continue to use insect monitors as part of your proactive integrated pest management program, even after your infestation has been addressed.

And it’s that easy with the expert help from DoMyOwn dot com. Subscribe to our channel for more DIY and product videos