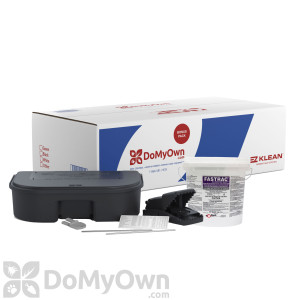 How do Rodenticides work?

(2) Nonanticoagulants. Nonanticoagulants vary in the ways that they cause death. Bromethalin kills by disrupting energy cells within the body, resulting in paralysis and death. Cholecalciferol mobilizes calcium, resulting in death from hypocalcaemia. Zinc phosphide enters the circulatory system as a gas, causing heart paralysis and liver damage. Some kill with a single does while others must be consumed over a few days.

The most effective rodent control efforts conducted today are accomplished with the use of rodenticide food baits. Rodent food baits are comprised of various common grain mixtures with an added active ingredient (rodenticide poison). Commercial baits are available in 3 basic forms:

(1) Pellet Bait is convenient, moisture-resistant, and the perfect size for rodents to readily pick up and carry with them. The small size encourages rodents to feed. This type of bait may not be suitable within certain kinds of facilities where translocation of bait would cause a concern (schools, stores, homes, or other sensitive accounts) since pellet-shaped foods are prone to being hoarded by rodents.

(2) Place Packs contain small amounts of pellet or meal baits sealed in plastic or paper packets for ready-to-use convenience. Rodents must gnaw into the pack to retrieve the bait, allowing for easy rodent monitoring (you will know the bait has been accepted if the pack is opened). Place packs also extend the life of baits when used outdoors inside of bait boxes.

(3) Block Baits use the same food-grade ingredients as pellet baits, formed into larger textured blocks with highly attractive gnawing surfaces. Block baits may be used in both damp and dry locations, and contain holes for securing the blocks to various items with wire or string. Most bait stations contain rods for mounting block baits. This practice prevents rodents from stealing the bait and moving it outside the bait station. Mounting block baits also protects the bait from moisture, insects, and slugs.

(4) Liquid Baits are an effective bait formulation especially in dry areas where water is scarce or absent. Liquid baits may also be used together with pellet or block grain baits for better control. Liquid baits must always be used with professional liquid baiting containers that protect the bait and minimize spills.

Bait stations are enclosed boxes designed to hold baits while protecting them from moisture, spillage, dust, and dirt. There are two kinds of bait stations.

(1) Non-Tamper-Resistant (NTR) bait stations protect baits from indoor elements such as dust and dirt. NTR bait stations are typically made of inexpensive plastics or cardboard and may be easily broken or crushed by wildlife. NTR stations are not suitable for most outdoor programs or areas accessible to children, pets, and non-target animals.

(2) Tamper-Resistant (TR) bait stations are designed to be more durable than NTR stations, constructed from either metal or heavy, pliable plastic. Tamper-resistant stations decrease contact between people, non-target animals, and the rodenticide bait. TR stations must always be used when in accounts where baits are accessible to children and non-target animals. To be fully tamper-resistant, a TR station should be secured in place to the ground, floor, or walls, with the bait secured inside the box.

*Always apply bait in locations out of reach of children, pets, domestic animals, non-target wildlife, or in tamper-resistant bait stations.

31 of 33 people found this article informative and helpful.