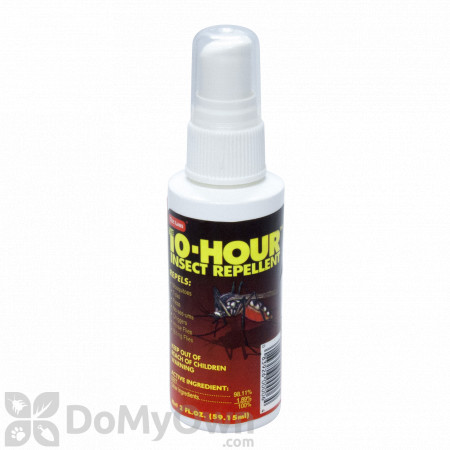 This 10 Hour Deet Insect Repellent contains 100% DEET professional strength formula that has the highest level of protection available. It will last for 10 hours and will not sweat off. This product is the best protection for mosquito infested areas because it contains the most concentrated formula. With just one application, this formula will protect from mosquitoes, ticks, chiggers, black flies, and many other insects. It is unscented to humans, but strong to insects. This tiny, fine mist, 2 ounce spray bottle will last as long as 3 aerosol cans. 10 Hour Deet Insect Repellent will protect you from insects that carry Lyme Disease, Encephalitis, and West Nile Virus. Deet was developed in 1954 by the United States Department of Agriculture for the United States Army and is known to be the most effective insect repellent on the market.

- Why should I use insect repellent?

Insect repellents help people reduce their exposure to mosquito bites that may carry potentially serious viruses such as encephalitis, West Nile virus and Lyme disease, and allow them to continue to play and work outdoors.

- Which mosquito repellent works the best?

The most effective repellents contain DEET (N,N-diethyl-m-toluamide), which is an ingredient used to repel pests like mosquitoes and ticks. DEET has been tested against a variety of biting insects and has been shown to be very effective.

The more DEET a repellent contains the longer time it can protect you from mosquito bites. A higher percentage of DEET in a repellent does not mean that your protection is better, just that it lasts longer.

- Why does the CDC recommend using DEET?

DEET is the most effective and best-studied insect repellent available. (Fradin, 1998). Studies using humans and mosquitoes report that only products containing DEET offer long-lasting protection after a single application. (Fradin and Day, 2002)

- What insects should I be aware of when working outdoors?

As an outdoor worker you need to be aware of mosquitoes, ticks, spiders, ants and centipedes that are in the area. Some pack an ugly bite or sting, while others carry a variety of diseases such as encephalitis, West Nile Virus and Lyme disease.

- How do I protect against encephalitis, West Nile Virus and Lyme disease?

All three diseases are carried by ticks or mosquitoes. Therefore, an effective insect repellent that contains DEET should be used. If possible, you should wear proper clothing such as long sleeved shirts and pants that fit tightly around your wrists and ankles.

- What are the symptoms of encephalitis?

The typical symptoms are headache, fever, and extreme lethargy, which can lead eventually to coma, double vision, delirium, deafness, and facial palsy which often occur in the acute stage of the disease. The after effects of encephalitis may include deafness, epilepsy and dementia.

- What are the symptoms of West Nile Virus?

Most infections are mild and symptoms include fever, headache, body aches and occasionally a rash. More severe infection may lead to tremors, coma, paralysis and on rare occasions death.

- What are the symptoms of Lyme disease?

The first sign of Lyme disease is often a rash at the site of the tick bite. The rash usually grows to a raised, red circle that has a clear center and is warm to the touch. Lyme disease can also cause flu-like symptoms, headache nausea.

If a tick is attached, remove it immediately with tweezers. Gently grasp the tick as close as possible to the skin and slowly pull it away. If tweezers are not available, fingers covered with tissue paper can be used.

Do not attempt to remove the tick with petroleum jelly, hot objects such as matches or cigarettes, or by other methods. After handling ticks, be sure to wash hands thoroughly with soap and water.

- What is Rocky Mountain spotted fever?

Rocky Mountain spotted fever is the most common fatal tick-borne disease in the United States and is carried by the American dog tick. As a precaution, people should check at least twice a day for attached ticks. Using effective repellent and wearing protective clothing is recommended.

Have a question about this product?
Q
Is 10 Hour Deet Insect Repellent EPA registered?
A

Yes, 10 Hour Deet Insect Repellent is registered with the EPA with Registration number 50830-1.