Rodents can be notoriously hard to control as they do not always respond to basic trapping techniques. Learn some more advanced techniques recommended by our pros to keep your home or structure rodent free. 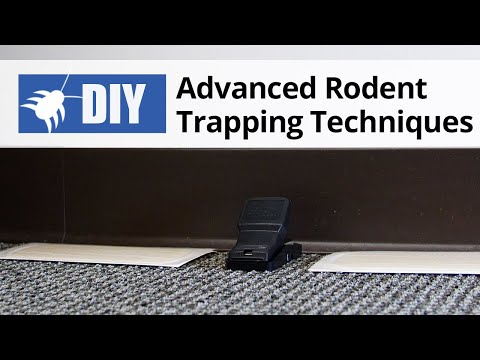 Baiting Rodent Snap Traps
How To Get Rid Of Rats

Hey guys it's Amber with DoMyOwn and today we're going to go over lots of tips and tricks that we know in the industry to make sure that you're using your product safely appropriately and making sure that you're getting that rodent population under control as quickly as you like.

Rodents are going to get smarter over time so sometimes it takes tricking them and outsmarting them a little bit and really showing them who's in control of this situation. You can do this by taking your snap trap, placing it against the wall, business end facing the wall, and then using glue boards on either side. Since glue boards are going to be placed flat on either side of the trap, it gives a little more illusion to the rodent that they have more space to slow down before getting to that trap. If they happen to see it in their runway. By the time they hit that glue board, it's normally too late and they're either going to get stuck there or it's going to slow them up enough to where they get caught on your snap trap. Another thing rodents can do is jump. So as they're coming along, if they see something, they may try to jump over the trap. Having the glue board on both sides is another backup way to make sure that they're caught no matter what, so that if they jump they're still getting something that you've put out in place for them. In some instances, even going through the steps of having multiple traps out, glue boards on either side, sometimes this is not enough to outsmart our little mouse.

So we have what we've made here as a homemade if you don't already happen to have a bait station lying around that's big enough for a snap trap, you can use an old shoe box. Now what we've done is we've taken an old shoe box and created the same sort of design as you would have in a rodent baiting station. We want a hole on both ends so the rodent can easily see through the box and not feel like it's something that might be dangerous to them by allowing them to see straight through. You can then place either a glue board or a snap trap inside your box as the mouse goes in it doesn't know what's waiting on it and it gets caught on that trap a little bit easier.

Now we talked about the placement of traps against the wall. One thing that we want to make sure that we note is that we're not putting a lot of traps in corners. While in some cases, like behind refrigerators or under cabinets, you're not really going to have much choice but to put the trap in a tight space. But if you notice them running through a room or you've noticed droppings or any signs of them in a larger area, you want to make sure that you're not placing those snap traps or glue traps into the corners. Rodents slow down as they're going around corners and the last thing you want that rodent to do is slow down, see your trap, and then avoid it. So let's put it actually in the middle run of a wall rather than the corners to make sure that the rodent's in full speed and has less chance of it being able to avoid anything that you put in its way.

Now, a lot of people will have rodents in more than just the normal living areas of their home. Maybe they're in an attic or an area where there's a lot of rafters and beams that the rodents can easily run across. In a roof setting like that, you may not be able to catch the rodents just by placing the traps out on the ground of the attic area. Instead, you can take a trap and often run a zip tie through the little areas on the side of the trap and attach it to a beam that they may be running across. This is a great way to make sure that you're getting control whereas you may not get it just placing it near some insulation or in a dark corner of the attic. We want to make sure we're focusing on where the rodents are actually traveling. Look for signs of urine or fecal matter. A UV light or a black light is great for looking for these trails and signs of them in hard to reach areas and making sure that your placement is going to give you the most out of your treatment.

Rodents will travel a lot more areas than we actually physically see them moving throughout the home. Whether it's under appliances, through the walls themselves, or just right through the middle of your living room. You want to make sure that you're placing plenty of traps out so that no matter where that rodent goes, it has a good chance of getting caught. The more traps you have out, the faster you're gonna get that rodent problem under control.

The other nice thing about using traps, as we mentioned before, is that you have control over where that rodent dies. When you use baits indoors, which we don't recommend, you end up having a much higher percentage of your rodent population dying indoors which may end up being right behind a wall that you can't get to. This may mean doing a little more DIY than you expected of cutting open some drywall to remove a decomposing rodent body or you may end up just having to deal with that smell for several weeks until that rodent dies.

Let's make sure that we're using the appropriate products inside the home getting you the best results and following all those tips and tricks. If you like this video and you want to see more, head over to our channel, give this video a thumbs up, make sure you hit that subscribe button, and check out our other how to and DIY videos. Thanks for watching!