Rodent Snap Traps should be baited with food-based and nesting materials indoors before using to ensure they are effective. The pros at DoMyOwn.com are here to help. 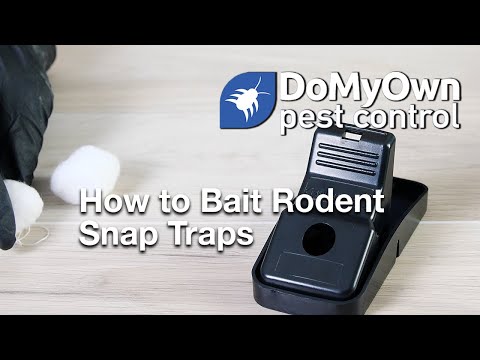 How to Use Rodent Traps
How To Place Rodent Snap Traps

Using snap traps and glue boards inside is preferred over a poison, as you can control where the rodent is going to die and you don't have to deal with trying to find the body in an accessible area like an attic crawl space wall void where you have to deal with the smells insects other things that that attracts.

When using rodent snap traps, you want to make sure that you wear gloves so that there is no human scent on the traps which will deter the rodents from being attracted to it. You first want to use them unset. That means you want to take like a paper plate, a tin plate, anything like that and set the trap in the middle of it and put food-based attractants around it. You want to give them a multitude of different types so that whatever they're going for. You want to know what you need to set the trap with so you can put fruit, cookies, a piece of meat, tuna, cat food, anything like that just around the trap.

You want to leave this set out for at least five to seven days so that they can get used to it because they are very neo-phobic of new things in the area and we'll be afraid of it for the first little while, so it will take time for them to adjust and know that it's not going to harm them.

When you do go to use the trap with your selected food-based attractant, you want to use just a small amount inside the bait cup. You don't want to put too much because that will allow them to just be able to pull it out and not set the trap. You want to actually try and make them work for it a little bit, so just putting a small amount in the bottom of the bait cup is recommended.

Or if you're going to use peanut butter, you can smear it along the underside of the trip petal. Just make sure you avoid any moving parts of the trap, because you don't want the oils to get into there and break it down. You can also purchase food-based attractants and lures on our website instead of just using food.

Other things you can use besides food-based attractants in the snap traps are going to be nesting materials such as cotton balls, strings, anything that's fluffy that the rodents will be looking for in the fall to build a nest.

Thanks for watching! Make sure to subscribe to our channel for more DIY and product videos.