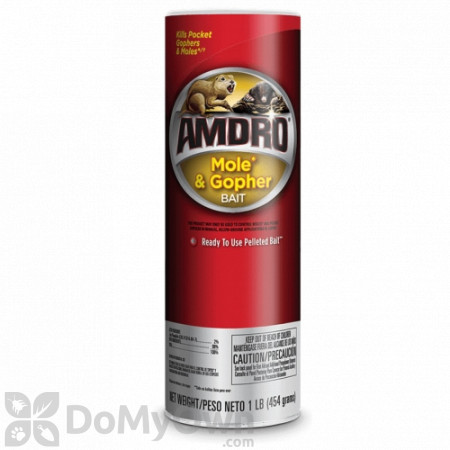 Amdro Mole and Gopher Bait is a ready-to-use pelleted formula that helps get rid of these lawn-damaging animals. This highly effective bait kills gophers and moles to help protect your property and prevent them from further damaging your lawns and gardens. It is very easy to apply and it comes in a shaker canister for every user's convenience. Labeled for residential use. Available in 1 lb. can.

*Not for use on moles in California, Indiana or North Carolina.

For Pocket Gophers: Apply bait to control pocket gophers using one of the two methods outlined below:

Plug Removal Baiting: Burrowing pocket gophers throw out low, fan shaped mounds on either side of their underground tunnel. These lateral tunnels coming to the surface are on the flat side of the fan and are plugged with soil. Using a long-handled spoon, carefully remove the plug. Insert one teaspoon of bait as far down as possible. Reclose opening, being careful not to cover bait with soil.

Main Runway Baiting: To locate main runways, probe about 6 to 8 inches away from mounds by use of an iron bar, a strong stick, or other suitable implement. Resistance on probe will drop suddenly and probe will fall about two inches when main runway is entered. Carefully enlarge the opening to accommodate insertion of the bait. Insert one teaspoon of bait into each active tunnel. Carefully close the hole with a stone, sod, or soil. Take care not to cover bait with soil.

For Moles: The presence of moles may be indicated by a network of surface ridges in the turf, by a series of conical mounds of earth pushed up from deep burrows.

Surface Ridges: Prior to treatment, determine which burrows are active according to one of the following two methods. Either press down a small section of the tunnel or remove a one-inch section of the tunnel's roof. Mark these sections and recheck in 24 hours. The burrow is considered active if the flattened runway has been raised up or if the roof has been repaired. Only treat active burrows. Carefully punch a hole in the top of active tunnels, drop a teaspoonful amount of bait and carefully close the hole with sod or stone. Do not collapse the runway again or allow loose soil to cover the bait. After a few days check to see if the burrows are still active according to one of the two methods described above. If so, repeat treatment.

Conical Mounds: Remove center plug from the conical mounds with a long-handled spoon and drop a teaspoonful amount of bait in the underground tunnel. Close opening with rock or sod. Do not allow loose dirt to cover bait.

Follow-up: Wearing waterproof gloves, collect and dispose of dead, exposed animals. Dispose of leftover bait in accordance with disposal instructions. Use detergent and hot water to wash spoons used for application into burrows. Do not use spoon for mixing, holding or transferring food or feed. If reinfestation does occur, repeat treatment.

Have a question about this product?
Q
How effective is Amdro Mole and Gopher Bait in NW Arkansas?
A

Amdro Mole and Gopher Bait is labeled to kill moles and gophers. If you follow the labeled instructions to treat for either of those, then it should be effective in Arkansas.