Do My Own Gardening - Raised Garden Bed Soil Mix

Now that the garden bed is built, it's time to put in the soil! In this episode, Paul will go over what types of soil to use, weed barriers and how to add the soil to the raised garden be 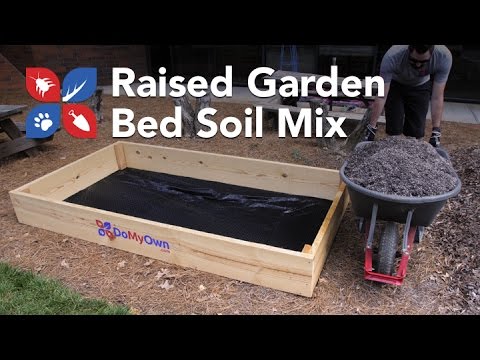 Much needed! Now there is no mistaking who this box belongs to!

Now that the garden bed is built, let's get some soil down. But before we do that let's go over some other things you should consider before putting down your soil.

Because our bed where the picnic table use to be and there's already pine straw, there's not a whole lot of weeds or grass that we have to contend with. So let's go ahead and take a look at our bed and see what we're dealing with.

So there's not a whole lot of weeds that we have to deal with, we've got a little bit here and some back there but it's mainly all pine straw. So there's not grass or weeds that we have to go in and pull out which is a good thing. But again if you do have any grass or weeds, make sure to go in, dig it all out, clear out the area as much as possible, and then we'll move on to the next step.

Now that we know the area is cleared out, what we're going to do next is put down a weed barrier, which is a mesh type of material that prevents weeds from growing into the bed, or at least helps prevent them.

In our case, what we're going to do, is we're going to take our bed, flip it over, roll out our mesh, and staple it to the bottom of it, and then flip the bed back over. On to step number two!

Now that we've got that stapled to the bottom, you call in one of your co-workers to help you flip it back over!

Now let's talk about our soil! There's tons of options when it comes to selecting a soil to put inside of a raised garden bed like this. There are different reciepes out there that you look up and mix up your own type of soil. That will depend on the type of region and the climate that you live in, which recipe you go with. But there's also pre made garden mixs that you can buy and simply dump into a bed.

We're going to go with an organic pre made gardening mix. I'll leave a link the description box below so that you can click over to our website and read more, but basically it's a organic mix of earthworm castings, perlite, peat moss, and mycorrhizal fungi.

TO figure out how many bags we're going to need, we need to first figure out how much cubic feet that we're dealing with inside of a four by eight box. To do that, we'll measure in inches, we'll measure the lenght, then will multiply that by the width, and then will multiply that by the height. We'll take whatever that number is, and then divide that by seventeen twenty eight. One thousand seven hundred and twenty eight. And that will convert it over into cubic feet for us.

After doing the math, we've got about twenty seven cubic feet that we're going to be dealing with. So, we've figured out we need about seven to eight bags of pre mixed gardening mix to put inside of our raised bed.

Now don't worry if the soil doesn't come all the way up to the top of your raised bed. Meaning it doesn't come level with the sides. You want to leave about an inch or two to put a top layer of mulch. And we'll talk about that in a second.

But for now, let's go ahead and get the soil inside of this bed.

It's the next morning after putting in all of that soil. It took a lot more out of me than I expected yesterday afternoon. So I took a break and decided to finish up this morning.

The thing about the soil that we used is it comes compressed in these bags. Once you open them up, they kind of uncompressed and they fill up a lot more space than you would think.

Having said that, we want to water it down so that all can settle and compact in there a little bit more to see if we need to add more soil, so we're going to do that now!

After soaking the soil down, we've got about three inches between the top of the soil and the top of the bed, so I think we can afford to put one additional bag of soil on top of what we already have. So that's what we'll do now.

That's not even one full additional bag. It's about half. We're going to go ahead and soak that down and let it settle and see if we can add the rest in.

So this is the second soaking. I did all the soil yesterday, soaked that down, put a layer on top of that, soaked it down, and this is what we've got. We've got about an inch and a half, almost two inches, between the top of the soil and the top of the bed, so I'm going to call this good. I'm not going to put anymore. We've got probably about a half a bag left in the wheel barrell. So this is good! We're going to leave it right here.

There we go! We've got our weed barrier down, we've got all of our soil in there, it's nice and settled, we're ready to start planting.

Hope that was helpful! If you have any other questions, leave them in the comments section below, call our customer service staff or shoot them an email.