Do My Own Lawn Care - Overseeding Cool Season Grasses

One of the best kept secrets to growing a big beautiful green lawn, is overseeding! If you are just now getting into the do my own lawn care game or have been at it for years, overseeding can greatly improve the way your lawn looks! All overseeding is, is just simply putting existing seed on top of an existing lawn. If you do it right, what use to be a thin pathetic looking lawn, will eventually turn into a full very healthy looking in lawn. In this video, Paul will discuss the tips and tr 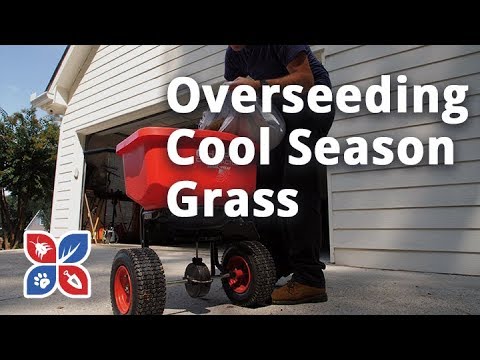 Well, here we are again in the disgusting, horrendous looking back yard.

I mean it really is that bad back here. As a matter of fact, on the last video, one of our customer service staff members watched it, said, "Dude! It looks like you've got a ton of weeds back there."

And I says to them I says, "You have no idea how bad it really is."

So fortunately for me, because I work with them, we were able to hope in the car on my lunch break, drive over here, they took a look at it and said, "Yeah. It's bad!"

But we're still going to stick with the original plan. I'm not going to put any herbicides down back here. I'm just going to mow, I'm going to overseed one more time, which is what today's video is about, and next spring is when I'll start doing some weed control.

And speaking of herbicides and weed control, pre and post emergents, I've already kind of got a date in mind of when I want to put down my first application. But that's for another time.

So the first thing I want to do today, I mentioned it in the last video, I dropped my mower down two more notches, and I'm going to go ahead and mow down these weeds before overseeding. So, on to that step.

Again, I know it's not a fix all to the problems I've got going on back here, but dropping that mower two more notches down and mowing down some of these weeds, it's going to allow for me to get some more seed down to the soil so that I make sure that I get good seed to soil contact.

I'm really happy with the way this is turning out on the side here with the Bradford Pears. The fescue is really growing in good here. I still have weed problems, it's just not as bad on this side as it is in the main part of the back yard here. So, this sides looking pretty good. We're getting there.

So now on to today's topic, overseeding cool season grasses, and it's two fold. It's a two fold mission for today's video. One, yes I most certainly want to overseed back here, but two, I fully recognize that a lot of the stuff that I talk about is for more southern regions and warm season grasses because I live here in Georgia and I have a warm season grass, mainly in the front, Bermuda. So, wanted to throw out some tips for all you friendly folks up North and anyone that's got a cool season grass in their yard.

So for starters again you overseed for two main reasons, to repair thin lawns or to prevent thinning before it even starts to happen.

For southern lawns, you overseed warm season grasses with a cool season grass to keep a nice green color throughout the winter time.

So when warm season grasses go brown or they start to go dormant, overseeding with a premium cool season grass, like a perennial rye grass, will help keep them vibrant and green through out the winter season and their dormancy.

A combination of good cool season grass and good fertilizer will help keep your lawn temporally green while that yard starts to go dormant in the winter.

So far all of you folks up north, the best time to overseed is late summer and early fall when cool season grasses tend to grow best.

The cool fall air that you've got is going to help stimulate growth.

And your soil moisture levels are going to fluctuate less during this time of the year.

Also, warm season weeds, like nut-sedge and crab grass, they're going to be much less active in the fall time. Which means you don't have to combat against them. Most of the time.

My back yard, I got a long fight ahead of me.

Now most extension offices out there that I've researched and talked to, they said that you want to overseed at least 45 days, for cool season grasses, before the first expected frost of the season.

And southern lawns, you'll overseed in late spring when warm season grasses start to get into their active growing season.

So if you want a big green beautiful luscious lawn in the winter time, you'll want to overseed in the fall.

Also another tip when it comes to overseeding, you'll typically wait for night time temperatures to start to drop just below 65 degrees Fahrenheit.

Another tip to throw out there, if you have problems outside of normal thinning, you might want to consider doing a soil test, and do corrections as needed per that soil test result, before you go to overseed your lawn.

Now we've talked about this before but a soil test again, is going to tell you, and give you recommendations on how best to fix problems in your yard, such as bare spots, thinning lawns, what kind of amendments your soil needs, what kind of fertilizers are best; I really recommend you do a soil test if you haven't done one already.

It will also kind of give you an idea if you need to dethatch the yard or bust out the core aerator and bust up any kind of soil compaction you've got going on in the area you're thinking about overseeding.

Also, keep this in mind, better seed yields a better lawn. So by doing a soil test, you'll figure out what kind of seed is best for the region that you live in and what kind of soil amendments that you're going to need for that seed to really thrive.

I've already done this step back here but you want to drop your mower and mow the lawn extra short and rake out all those clippings and any kind of yard debris left over by the mower, if you're not bagging it. And, just really prep the yard so that your seed can get down to the soil and make sure that it gets enough sun light and water.

So for cool season lawns, we would recommend dropping the mower to two inches or less for a regular overseeding.

For southern lawns or warm season grasses, if you're trying to achieve green color through the winter time, I would drop the mower or the blade as low as it can go, and scalp it down to the soil level.

After doing that, I would bust out the metal thatch rake to loosen the soil even more and remove any kind of thatch and debris that's left over after you've scalped it down.

Again this will loosen the soil and allow for the seed to get the best seed to soil contact so that it can work it's way down in there, germinate and thrive.

Now that we've covered most of that, it's time to bust out the spreader, bust out my seed and get to throwing it down.

So when it comes to the seed, you wan to apply the seed at the recommended rates per the label.

Also, use a spread that works for your property and your needs.

Typically drop or broadcast spreaders like mine, you would use for larger areas and larger lawns, and hand held spreaders are going to be used for small areas and much smaller lawns than what I've got.

Also, just want to add in there, that you want to make sure that wind conditions are pretty calm when you do it so that your seed doesn't just blow all over the place and you're wasting product, money and time.

So you might be asking yourself, how did I measure out 15 pounds from that bag to put into my spreader? It's not an exact science but I had a 50 pound bag, the first time that I did an overseeding, I put about a third of the bag in there, leaving me with two thirds. This time I put that other third in there, leaving me with about one third in the bag. So 15 and 15, 30, another 15 in the bag, that's about 45, so close to 15 pounds each time that I've overseeded. Like I said, it's not an exact science but it works.

Calibrated the spreader to overseed an existing lawn, seeds in the hopper, time to get moving.

Seed is down, now I just got to water it in. Something to keep in mind, newly overseeded lawns need constant moisture for them to get down into the soil and thrive.

After you've backed off to once a day for about a week, back off even more and water more heavily every other day for another week.

And after that, just asses where you're at and to prevent wilting just water as needed.

Doing all of this is really going to encourage that seed to get in the soil, germinate, establish it's root system and really just strengthen it up, and next thing you know, you got a yard.

Or, that's the goal. We'll see. We'll see what happens.

So that's really it for this one. I hope you found it helpful. Hope we threw out some good tips for you. If you liked the video, hit the thumbs up. If you have any other further questions, leave them in the comments section below, email the customer service staff, or pick up the phone, give us a call.