Do My Own Lawn Care - Fall Lawn Tip

Weeds have really taken over the back yard, while the Tall Fescue that Paul has overseeded is still growing in nicely. In this video, Paul will discuss why he choose to not spray any kind of weed control in the back and on the side with the Bradford Pears. Main reason, he doesn't want to risk stopping any of the good growth that is happening back there. He will also cover why you should consider putting down one last application of fertilizer now instead of later in the fall, going into winter. 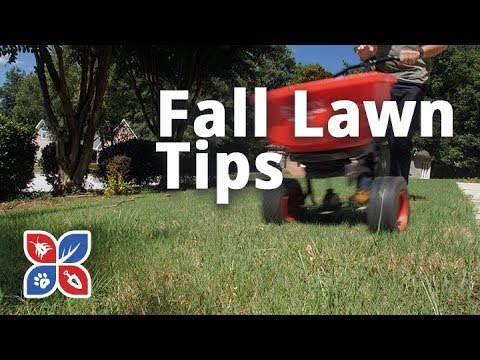 Now, I don't want anyone to be alarmed by what they're about to see.

And I'm not talking about the weeds.

Prepare thyself. It's still me! Just without the beard. I know I know! Trust me, I'm not use to it yet either.

Give it some time. But enough about the beard, let's dive into some lawn goodness and first talk about the state of my back yard.

I mean it's, it's still pretty bad back here. We still got a lot of weeds, but there is hope. Fescue is growing in. That overseeding that I did was some what successful

. I didn't get quit the results I wanted, but I've got a plan for that. But let's just take a look around and see what kind of problems we've got back here.

Look at all this over grown goodness of weeds we have going on back here. Weeds galore. But it's not to terribly bad. Nothing we can't fix.

I haven't been back here with a lawn mower in well over a month because I wanted those seeds to really get into the ground and germinate, and try to establish themselves before breaking out the mower and I think it's time.

I think it's time we break out that mower and start tackling some of the weeds we got going on back here. I few episodes ago I had mentioned how I didn't want to tackle the weeds back here, while putting out some new seed.

I just didn't want to risk getting those seeds in the ground and spraying something and neautralizing all of that good seed that we put down. I really just don't want to risk it.

I don't want to undo all of the hard work that we've already put in back here. We still got a bunch to do, but I don't want to undo the work that I've already done and risk destroying or damaging that good growth of the fescue that we have going. But the one thing that I can do to try and start tackling the weed problem back here...well... Obviously raise the mower up as high as it can go, just to knock some of this down and start to gain control of a little bit of it.

I know this isn't a fix all, obviously, but this is the beginning, this is step up, phase one, whatever you want to call it, so let's get to it. It seems like I did little to nothing and that had no impact or made a dent what so ever. But feast your eyes on how full that bag is. We made a dent. Good work!

The main reason I raised the mower up as high as it could go is I just did not want to risk tugging and tearing at all of that good growth that we did get from our overseeding. I just really want to make sure that it gets a nice strong root system and really establishes itself before I drop the mower down and really start to properly mow back here. Now I'm going to come back here next week, in about a weeks time, drop the mower about one more notch, give it another good cut, and then I'm going to overseed again.

And the reason for that, I did get ok results from my last overseeding, but it really wasn't the desired results that I wanted. So by mowing down some of the growth back here, dropping the mower another notch, mowing it again, and then overseeding once more, hopefully we'll get this really thriving and growing back here. And hopefully get a yard to grow. At least that's the plan. Giving our track record of how mother nature's been throwing wrenches in our plans, we'll see!

Now that we've got that out of the way and established let's move on to what I really wanted to discuss for this video, and that's fall lawn care tips, or at least some. So first up, let's talk about fertilizing for the fall. Now I plan on putting down another application of organic fertilizer here in my front yard where my Bermuda is at.

And on the product label of the organic fertilizer that I'm using, it is recommended that Labor Day weekend or around Labor Day weekend is really the last time that you want to put down a fertilizer for the year. And this is for both cool and warm season lawns. If using a synthetic fertilizer, it's recommended by our customer service staff and a lot of product labels out there, that you put that down at this time as well, rather than later in the fall.

And the reason for that, if you put down a synthetic fertilizer later in the fall, going into winter as the lawn starts to go dormant, it stores up nutrients. So if you put down a fertilizer, it's going to take whatever nutrients from that NPK value of the fertilizer that your putting down, store it up into its root systems and then you get a frost coming through, it could just really shock and damage the turf, if you wait later in the fall, early winter, ti put down a synthetic fert.

So, now's the time that I would put down a last fertilizer application in your yard, and get that green goodness going through the end of September, start of October, and then let your yard start to go dormant. And with that, let's bust out the spreader and throw down some fert. Done!

Back yard's been trimmed down, our fall fertilizer applications been thrown down in the front, next thing I want to talk about, pruning! I want to thank the viewers for pointing this out to me, my Bradford Pears back here definantly need some more pruning. They need to be limbed up a little bit more.

Those limbs are starting to droop more than I would like them to, so it's time to tackle that project once again. Now I've already made a video on this subject, all about pruning, why you want to prune and how and all of that kind of stuff. It was way back at the beginning of this series, I'll link that in the description box below, or click that little "i" icon at the top of the screen, and you can go and watch that video.

But seeing as how I have to do it to my Bradford Pears, let's touch on pruning a little bit more. Now when it comes to fall time and pruning, don't do it. I know I know, I'm pruning my trees, I'm talking about pruning, I'm suggesting pruning, but just don't do it in the fall time and here's why. Decay fungi spread through spores big time in the fall season. And another reason you don't want to prune in the fall time, the healing wounds seem to go and heal a lot slower at this time of the year versus other times of the year. Now when is the right time to do some pruning?

That all depends on why you're pruning in the first place. Light removal dead limbs, that can be done anytime. Winter time, during dormancy, this is usually the best practice. This is when most people tend to prune. Winter pruning will give you vigirous spring time growth.

Matter of fact that's what I do with my Crype Mrytles here in the front. I limb those up when the coldest part of the winter has come and it's passed. Again doing this, you'll just get bigger, more beautiful blooms in the spring time. Summer time pruning can direct growth by slowing branches that you don't want. If this is the time of the year that you choose, wait until seasonal growth has completed before busting out any kind of tools to do some pruning.

The other reason you would do some summer time pruning is to do some correctional growth or to just maintain a desired shape. Like my Magnolia right there! I cut off a lot of the lower limbs of that Magnolia so that I can keep my desired bell shape, and so that it's easier to get under and mow.

Also a huge thank you to everyone that commented on our last video, giving us suggestions on how we should tackle the rehab program at work and the products that you want to see us use on that lawn. If you don't know what I'm talking about, I'll leave a link in the description box below to that video, so you can click back, watch that episode and catch up on what I'm talking about. We're taking all of those suggestions and product recommendations.

we're throwing it down on paper and just kind of toying and planning and formulating on what we're going to do next year for that yard, but that's for another time and another season. Still got a long ways to go with the back yard and this side with the Bradford Pears, but this was the first of again many steps to get this under control and looking good. Hope you find this video helpful. Hope you liked it. Hit the thumbs up if you did. If you have any other questions or comments, as always leave them in the comments section below, email the customer service staff, or pick up the phone and give us a call.