Do My Own Lawn Care - Plant Growth Regulator and Liquid Fertilizer

In this video, Paul has the opportunity to put down a liquid fertilizer and a plant growth regulator in the yard. He also discusses why he is using these products and the benefits they bring. 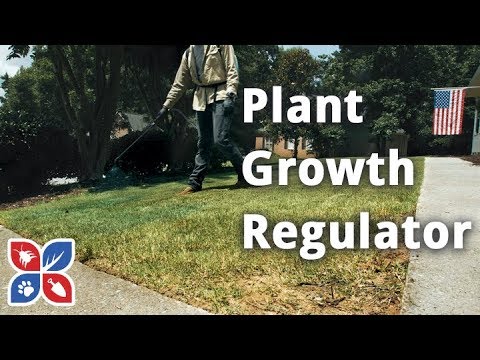 Yeah we got a bit of work to do today!

But before we get to all of that, I want to do a follow up on our last video. The tree sucker problem that I had. That sucker stopper did a really good job of preventing those things from popping up in the yard. I've just kind of been going through and plucking them out as I see them and spritzing that on there. It's done really good.

It's been about a week and a half since that last video and I haven't mowed or done anything to the yard, and by now you usually would see those suckers sprouting up above the grass. They're really obvious. But, like I said, I've been plucking them out and spraying that sucker stopper on them as I see them, and they're gone! Don't have the issue anymore. So, good stuff!

There are a few bare spots where I plucked those out and put the sucker stopper down. Like right here. But hopefully what we're going to do today is going to help fill this in and take care of that issue.

Now like I mentioned it's been about a week and a half since I've busted out my mower and done anything in the yard, because we've had severe thunderstorms, late in the afternoons and pop up showers throughout the day. It's just, we've gotten a lot of rain here recently.

But the forecast is clear for the weekend. Today's a Friday. That's when I typically shoot these videos and release them the following Thursday. The weekend is clear. We don't really have any rain forecasted so, I can actually get to doing what I've been wanting to do for awhile now. But first step, got to do some mowing.

Pretty sure the Bermuda is going to look like crap after I mow it because I have not put down a fertilizer in, man, I don't even remember the last time I put down a fertilizer. I know! I committed a lawn care sin. But I'm going to repent of that today and correct that with today's application of the liquid fertilizer. But before I do any of that, mowing, and putting down that application, I wanted to get some beautiful, cinematic shots, before all of that. So, enjoy the beauty.

Alright, enough of that. Time to cue the aerial montage and music!

Alright, so let's see how many clippings we got after that mow. Look at that. Full bag. Jam packed in there. And this right here is just the front yard. Just the Bermuda.

And this is after mowing the turf type tall fescue in the back and on the side with the Bradford pears. I realized I hadn't said that in a while. Anyway, that's jam packed as well. So, take this with a grain of salt, because again, I hadn't mowed in probably a week and a half, two weeks because of all the bad weather we've been having. But, still, a lot of clippings.

So almost filled up an entire yard bag of clippings for the front and the back.

So front and back yard is mowed and as I suspected, it's just, it's under some heat stress and it's lacking some nutrients. So, as you can tell in the back, I don't know if that's showing up on camera well or not, there's just a lot of discoloration. The color's not even throughout the yard what so ever. There's some, just kind of light gray spots, it looks kind of lime green, and it's just, it's not filled in really well. So, let's talk about the application of the growth regulator and the liquid fertilizer I'm going to put down today.

Alright, so usually I use an organic granular fertilizer, but that craps in short supply these days. So that's why I'm going to be using a liquid fertilizer along with a growth regulator. I've been wanting to try this combination for awhile. I've just really enjoyed the organic granular fertilizer that I've been using. But, I'm going to give this a shot and see what kind of results I get.

Now this growth regulator is a micro emulsion concentrate that is going to help manage the growth of the turf. But at the same time it's going to help improve the quality and the stress tolerance of my warm season Bermuda here in the front and the cool season turf type tall fescue in the back.

A few other things that the growth regulator is going to do is help enrich the color of the turf as well as promote lateral growth instead of vertical growth. It's also going to help root mass development and it's going to give us healthier, more durable blades of grass in the turf.

So all of that stuff combined, it's going to really help the turf fight the seasonal stress it goes under. So, down here in the south when it gets up in the high 90s and we got about a thousand and one percent humidity and the turf starts to get stressed out from all that heat, it's going to help with that.

So by shortening up the plant, you're not going to have to mow as much. So if that's something you don't like to do, I don't know that we can be friends. I'm joking! We can, we can still be friends. But if you don't want to bust out the mower as much, this is going to help with that.

So growth regulators claim to fame is it reduces mowing by half because it shortens up the leaf blade. And when you do go to cut, you're not cutting off as much of the leaf blade, so it's not going to stress the plant out, therefore producing a healthier lawn.

And another claim to fame on this particular growth regulator, if you don't have a post emergent for poa annua, this can help suppress that as well.

Another thing I learned about this particular liquid fertilizer is it acts as a carrier for other products that you might want to mix up with it and put down in the yard. So, if you want to put down an insecticide or an herbicide or even a fungicide, you can mix those up with this liquid fertilizer and put them all down at the same time.

Enough yapping. Let's get to mixing and putting it down!

Hopefully this is going to show up OK. This is before I put down the growth regulator and the liquid fertilizer. We're going to look at this part of the yard right here. We'll compare the whole yard some how some way. I'll get some before shots. But right here is probably going to be my best example. This is where all that monkey grass use to be that I took out at the very beginning of this series.

And what I've been doing is just letting the Bermuda creep in here on it's own because that's what Bermuda does. It's a runner. It puts out runners and then it grows up. But what I've been doing is just letting it do its thing, get in here on its own, and try to fill this area in. But as you can see, it's still pretty thin. We got some weeds mixed in there, just kind of ignore that. We'll take care of that in the fall time when we do our pre and post emergent application then. But its still pretty then, like I said, Bermuda, its a runner. It puts out these runners, as you can see. We got some really good ones going on in here, but there just, its, its thinned out. So I'm hoping the growth regulator and the liquid fertilizer application that we're going to put down today is going to help this situation and help just create that horizontal growth instead of the vertical growth.

Interesting side note, over here is where I've already sprayed, you can definitely see the turf type tall fescue back here is under some heat stress. It's just really discolored. Kind of got some brown tones to it. Grayish tones. Really stressed out, so hopefully this helps.

Alright, now that we've sprayed we're going to pray to the lawn gods this does some good. Time will tell.

And yeah, I know I got to clean that out, I'll, I'll get to that, but this application of this liquid fertilizer and this growth regulator, especially with the liquid fertilizer, that should give me about point five pounds of nitrogen per thousand square feet. So if that doesn't help this thing bounce back and get some color and good growth to it, I don't know what will.

The growth regulator should help it as well, so we're just going to have to wait and see. I'll definitely do a follow up on this and show you the results of this application.

If you've got questions on anything we touched on in this video, leave those in the comments section below. We'll do our best to get to those. You can email them over to the customer service staff, pick up the phone, give us.a call.

If you're not already, click this button right here to subscribe to the channel. You can click this link to see the most recent episode of the lawn care series. And if you want to watch all of them from the beginning, click this playlist right here.