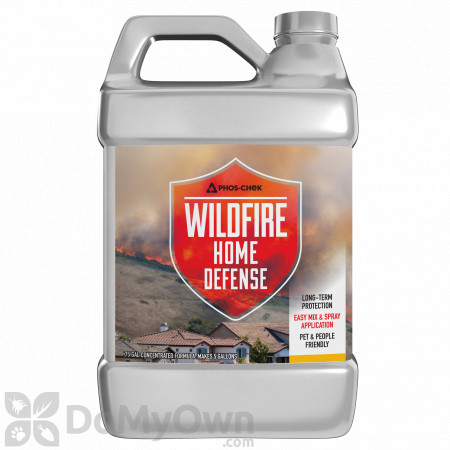 Phos-Chek Wildfire Home Defense, previously known as Phos-Chek Long Term Fire Retardant, the only way to protect your family and home from wildfire, is the safest, most effective, and environmentally friendly long-term fire retardant available today. This is the same version of the same fire retardant that is used by USDA Forest Service – that is available to homeowners. Phos-Chek Long Term Fire Retardant, is a colorless long-term fire retardant, is easily applied using any garden or agricultural sprayer. Once properly applied, Phos-Chek will help protect your property long before a wildfire begins. This is a concentrate that is made to mix with water and can be used with most simple garden sprayers. Pos-Chek Wildfire Home Defense is effective and safe when used as stated on the label.  It is designed to be applied as a preventative pre-treatment by spraying dry grasses, brush, wood, or other cellulose material around your home at the beginning of fire season.

While Phos-Chek can be applied within hours of a wildfire reaching your home, it is best used as a pre-treatment before a wildfire begins. Therefore, it is best to apply Phos-Chek at the start of fire season, where it will remain effective throughout the entire fire season so long as the weather remains dry. Rainfall of 1/4" or more will wash Phos-Chek off the treated vegetation and it becomes a fertilizer.

Careful planning is required before spraying PHOS-CHEK. With our concentrate formula, this involves the timing of the application, mixing, areas to be sprayed, and the amount needed. Please read below for details.

While PHOS-CHEK can be applied within hours of a wildfire reaching your home, PHOS-CHEK is best used as a pre-treatment before a wildfire begins. Therefore, it is best to apply PHOS-CHEK at the start of fire season, where it will remain effective throughout the entire fire season so long as the weather remains dry. Rainfall of ¼” or more will wash PHOS-CHEK off treated vegetation.

PHOS-CHEK Home Defense Fire Retardant is not intended for fighting a fire that is actively threatening a property. All evacuation orders from police and fire officials should be strictly adhered to.

Before spraying an area, clear away as much brush and deadwood as possible PHOS-CHEK should always be used in combination with recommended National Fire Protection Association Firewise USA guidelines for establishing defensible space around a structure.

Aim the spray nozzle toward the target area and begin spraying. Spray the area thoroughly in accordance with the recommended guidelines for vegetation type and height (see back panel and below for details).

Vegetation should be dripping wet with PHOS-CHEK and all dead ground fuel, such as leaves, bark, needles, and twigs should be saturated down to mineral soil. PHOS-CHEK cannot be over-applied.

Please note that when PHOS-CHEK is applied at high concentrations, leaf burn, and drop may occur. This is a temporary effect. Because PHOS-CHEK acts as a fertilizer, new plant growth should soon reappear.

When your spray tank is empty, simply refill and continue spraying until the entire perimeter around your home is treated. When the perimeter is complete, spray the remaining retardant onto less protected areas and flush the sprayer with water. It is not recommended to leave retardant in the sprayer.

Please note that when PHOS-CHEK is first poured into your home garden sprayer, it will appear as a pale green liquid. Following application, PHOS-CHEK will dry clear and may leave behind a white salty residue on the vegetation. This residue is the active ingredient in PHOS-CHEK and should not be cleaned or removed.

Spray PHOS-CHEK on wood and vegetation around the entire perimeter of your home, including your garage(s), other outbuildings, garden areas, and all areas of your property that you wish to protect from wildfire.

When spraying, apply PHOS-CHEK to flammable areas, such as large slash piles, downed wood, fallen leaves, needles, and areas of thick, dead plant material. Avoid leaving fuel untreated, which can allow the fire to escape. See back panel for areas to spray.

For the highest level of protection, we recommend individually treating any other fuel sources within the fire perimeter and close to your home to prevent the unwanted spread of wildfire due to embers.

It is NOT recommended to spray PHOS-CHEK directly onto houses and other structures. While PHOS-CHEK is effective on any cellulose material, including wood fences, decks, and shingle roofs, it is not effective on vinyl siding, composite decks, or other inorganic building materials. The best defense is a treated perimeter surrounding your entire property.Please note that while PHOS-CHEK is effective on wooden fences, it may be necessary to coordinate with neighbors before spraying any shared boundary.

Width of Area to Spray

6 ft. tall brush -- Spray a 12 ft. wide perimeter12 in. tall grass -- Spray a 24 in. wide perimeter.For tall trees, spray a perimeter that is 20 ft. wide around the tree, covering all ground cover, pine needles, branches, and dead plant material. We also recommend spraying the first 10 vertical ft. of the tree, covering all ladder fuels such as branch and needles that will allow the fire to climb.

Promptly clean your sprayer when finished. To do so, thoroughly rinse your tank with water and empty it. Then fill the tank half full with water and spray the water out through the hose and nozzle. Be careful not to wash away any PHOS-CHEK from treated areas. Do not leave product remaining in the sprayer. Use any extra product to reinforce areas that have been treated.

PHOS-CHEK is a long-term fire retardant and will remain effective as long as the weather remains dry. However, exposure to heavy water spray from hoses and garden sprinklers, and to substantial rain of ¼ inch or more, will wash away PHOS-CHEK. In these situations, you will need to respray the perimeter, or the specific area(s) affected by rain or heavy water spray, to ensure your home remains protected from wildfire.

In case of spill or leak, contain large spills and transfer the material to appropriate containers for reclamation or disposal. Absorb remaining material or small spills with an inert material. Flush residual spill area with water.

Have a question about this product?
Q
What is the area coverage per bottle of Phos-Chek Long Term Fire Retardant?

I have a average size ranch style home, all wood. How many units do I need to buy to cover walls, roof, and yard - roughly? Thank you.

A
The amount of Phos-Chek Long Term Fire Retardant will depend on what you are treating. If you are treating a 1000 sq. ft. area that contains mostly grass and a few bushes, you will be using 10 gallons of solution. One bottle of Phos-Chek Long Term Fire Retardant should cover what you are wanting to do. You will mix 0.75 fl. oz. per 4 1/4 gallons of water to make 5 gallons of solution.

15 of 23 people found this answer helpful

Q
What is the shelf life of Phos-Chek Long Term Fire Retardant?
A

Per the manufacturer, Phos-Chek Long Term Fire Retardant has an indefinite shelf life as long as it is stored in an area where it will not be exposed to moisture or where water may leak into it.

7 of 7 people found this answer helpful

Q
What kind of spray bottle should be used for application? Does Phos-Chek Long Term Fire Retardant come with a spray bottle?
A

Phos-Chek Long Term Fire Retardant does not come with a spray bottle.  The product label states that a standard home garden sprayer can be used for application.

5 of 7 people found this answer helpful

Q
I am interested in the Phos-Chek Long Term Fire Retardant. What does “long term” mean? If grass is cut will it require re-application? Will rain wash it away?
A

The Phos-Chek Long Term Fire Retardant  product label states that it will last "for the entire fire season so long as the weather remains dry.  Rainfall of 1/4 in. or more will wash Phos-Chek off treated vegetation."  If grass is cut or if you receive more than 1/4 in. of rainfall, you would need to reapply.

Q
Can I use Phos-Chek Long Term Fire Retardant for interior treatments?

I need an indoor fire retardant for curtains, upholstery, and rugs. Do you provide these products?

We apologize, but at this time we do not carry any fire retardant products that can be applied indoors. The Phos-Chek Long Term Fire Retardant is just for exterior use.

5 of 6 people found this answer helpful