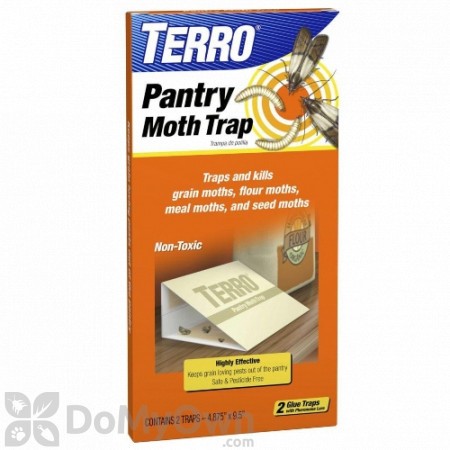 Terro Pantry Moth Traps are ready-to-use and non-toxic sticky traps which include individually wrapped pheromone lures formulated to attract and trap the most common moths faster than anything else. This product is highly effective on meal moths, seed moths, grain moths, and flour moths, keeping your pantry free from moth infestation. This trap can be folded in order to prevent pets or kids from coming into contact with the sticky surface. For best results, replace the moth traps every 90 days or sooner, if the trap becomes full of moths or dust. This particular product comes in a box of 2 glue traps with a measurement of 4.875 inches by 11.0 inches per trap and 2 pheromone lures wrapped in airtight packets.

*This product cannot ship to NM.

For best results, replace Terro Pantry Moth Trap every 3 months or if the trap becomes dusty or full of moths.

How do TERRO Pantry Moths work to get rid of moth invasions?

TERRO’s easy-to-use moth traps contain a powerful pheromone lure that attracts moths to the trap’s sticky surface where they get stuck and die.

How often should I replace my Pantry Moth Traps?

We recommend replacing the traps every 3 months or sooner if they become dusty or full of moths.

Is there anything I can do to prevent moth invasions?

Pantry moths -- often referred to as grain, flour or meal moths - are attracted to whole grains, flour, cereal and dry pet food that are typically stored in kitchen pantries. Placing these types of dry foods in tightly sealed containers and keeping pantries clean and free of crumbs will help prevent moth infestations.

If an infestation does occur, discard all contaminated food and place TERRO Pantry Moth Traps in areas where moths have been observed.