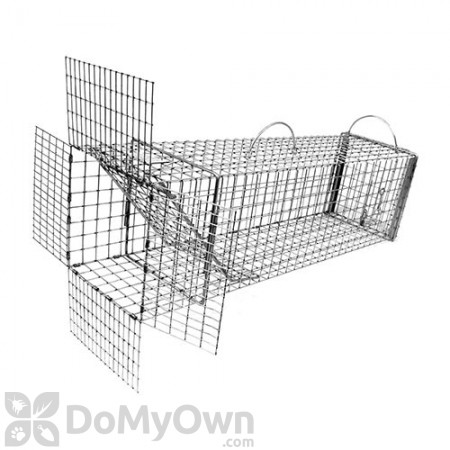 Tomahawk Model E80D is an excluder with a one way door and an easy release back door designed for skunks, feral cats, raccoons and similar sized animals. Excluders are designed to let animals remove themselves from unwanted areas. Excluders have mounting wings which allow them to be attached directly over the animals' entry/exit hole. The one way door lets animals exit but prevents them from returning. The rear door turns the excluder into a repeating trap; simply remove the rear door to use as a true excluder, or put the door in place to trap excluded animals. Model E80D is constructed from 1" x 1" - 14 gauge galvanized wire mesh, measures 30L x 8W x 8H and weighs 6 lbs.

Have a question about this product?
Q
Can Tomahawk Excluder One Way Door Easy Release Door for Raccoon door be installed under a soffit?
A

Tomahawk Excluder One Way Door Easy Release Door can be applied to the exterior of the structure and it has mounting wings which allow them to be attached directly over the animal's den opening for best results.