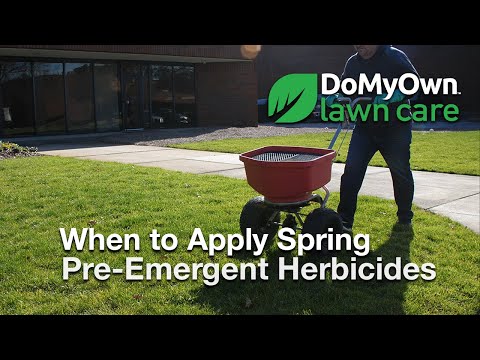 Today we're going to talk to you about when to apply your spring pre-emergent here at DoMyOwn. And I'm Heath. Getting down that spring pre-emergent is gonna be really important. It's gonna determine what your your lawn is gonna look like for the rest of the year. For spring pre-emergents, it's going to depend on your location as to when you need to apply those. It's really important before the soil temperatures get to 55 degrees that you apply those. So if you have a forsythia bush in your lawn or landscape that's a good way to judge it and once it starts to bloom out you know that the soil temperatures are in between that 45 and 50 degree range. And when it's in full bloom that's usually right around 55 degrees.

Customers are asking whether or not they are putting down their pre-emergent too early. There's a couple of determining factors that would play into that. First of all, you want to make sure that that pre-emergents can be labeled for your grass type. Second of all,  you want to read the label to see how long of a residual that you want. For the northern climates, it's really important that it's not freezing. That's the main thing. As long as the soil is thawed, you can apply your first pre-emergent.  You want to get that down before the soil temperatures reach 55 degrees.

Typically here we do split applications. Usually two pre-emergent applications in the springtime and then two in the fall depending on your grass type. For the early spring application, you want to make sure that you're getting that down before any of those spring weeds would emerge. And then doing another one usually six to eight weeks after that first initial application. But doing the split is going to give you a longer residual which means you can get your pre-emergent down earlier so you're not having to time that exactly with the forsythia blooming or your soil temperatures or anything like that, so you can have a longer residual by using the same amount of product which gives you the great results that you're looking for.

For example, if you're using a product that has a one-pound rate as a full rate service that'll give you about roughly five months of control with that. You can take that same half rate to a half pound and do it in a six to eight week interval and you can still get that five month control based off of the second application that you put down.

So when doing your split application of pre-emergents, it's important to do your aeration or anything that you need in between the two applications. Since the aeration is basically going to poke holes into your pre-emergent barrier, it's always best to do your second application after doing that aeration. Now some turf types need to be reseeded. You need to check with the label and see what your rate is that you've used before you do a reseeding because that will stop the seed from germinating. I'm a fan of putting some pre-emergent down no matter what the timing is. You can actually have some success with doing late pre-emergents on certain weeds even though you may still have a lot of weeds out there. It will control some of them.

Now check with your label to make sure that it's going to cover the weeds that you want. If you already have weeds that are currently in the lawn, you need to mix in a post-emergent with that. Mixing the two together can save you time and doing one application rather than doing a split application and applying them separately. Check with your label just to make sure that you can mix those two products together or give us a call here at DoMyOwn and we can help you with that.