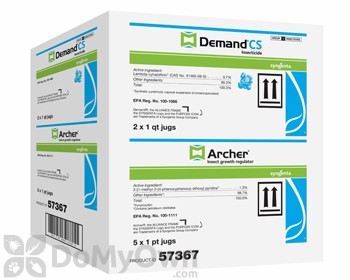 Demand CS: Demand CS is a water-based insecticide concentrate that offers excellent indoor and outdoor pest control. Demand's micro-encapsulated technology means that when you apply it, it leaves thousands of micro particles that bind to the surface offering long-term protection and fast insect knock-down. In fact, Demand CS is up to 200 times more active on flies, mosquitoes, and other insects than other insecticides. Demand CS controls more than 30 common insects including spiders, ants, flies, wasps, fleas, ticks and bed bugs. It can be used both indoors and outdoors with little to no odor or staining.

Archer IGR is an Insect Growth Regulator that is also photostable, meaning that it does not break down easily in direct sunlight. You can use Archer IGR to control insect populations both indoors and outdoors. The Archer IGR unique mode of action disrupts the life cycle of ants, fleas, flies, ticks, cockroaches, mosquitoes and beetles leading to effective population control.

For best results, IGR products should be applied with an insecticide such as Demand CS.  They can be mixed together and applied at the same time from a one gallon hand pump sprayer.

To understand how Demand CS works you must first know what it is. Demand CS is a microencapsulated water-based formulation offering superior insect control. Compared to older pyrethroid materials that have been used for many years with declining results, it is up to 200 times more active on flies and other animal health pests allowing lower rates. And it’s designed not only to work better, but to work longer. Demand CS controls over 30 insect pests including: Ants, Bees, Carpet Beetles, Centipedes, Cigarette Beetles, Cockroaches, Confused Flour Beetles, Firebrats, Fleas, Ticks, and more.

Large variety of yard, home and ornamental pests, including but not limited to:

What is an IGR?

Have a question about this product?
Q
How often do you spray the combination Demand CS + Archer Multi-pack for mosquitoes?

We currently use Talstar P and treat every 21 days.

How often exactly that you need to treat wtih Demand CS + Archer Multi-Pack will depend on the pest pressure in your area and at what rates you apply the Demand CS. In areas of high pest pressure, you may need to apply as frequently as once every 30 days. However, if you are using the higher rate of 0.8 oz. per 1,000 square feet, then one application may last 60-90 days. Please see the Mosquito Application directions of the Demand CS product label for full details and rates.

Talstar P should be applied no more than once every 28 days for mosquito applications.

Q
Can I use a non-ionic sticker with Demand CS + Archer Multi-pack?

If so, how many ounces per gallon in a mister would be the accurate rate?

It is not usually required/recommended to use a surfactant with Demand CS + Archer Multi-pack.

Q
Can Demand CS + Archer Multi-pack be used with a sprayer or do u have to use a fogger ?
A

We suggest you apply Demand CS + Archer Multi-pack  with a hand pump sprayer.