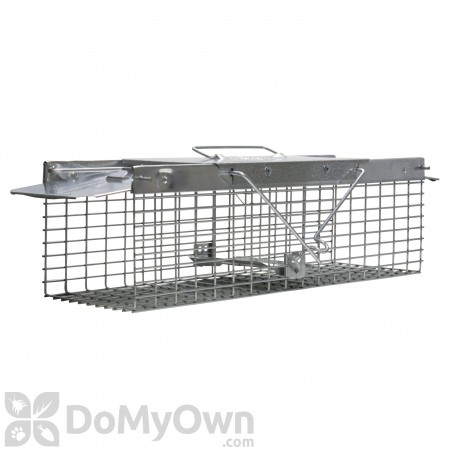 The Havahart 1025 is most effective when used in combination with a bait or lure.

The following tips should be used when preparing to live catch your nuisance animal:

Following the instructions contained in the carton, you may want to test the trap and spring it a few times to make sure that it works properly. For example, spring it by touching the trip plate from each end.

This should be done also after the trap has been set and camouflaged to make sure it works freely. If you feel the doors do not work fast enough, place small stones or other weights on top of the door. This will cause doors to drop faster.

When you receive the trap it will be bright and new. Therefore do not be discouraged in case you do not catch what you anticipated the first night or day. The effectiveness of Havahart® traps usually improve with age. Some animals do not mind a new trap while others do.

So instead of setting the trap to catch the first animal to come along, bait the trap, or simply place it where you intend to set it and fasten the doors open by means of a stick or wire.

After a couple of days, when you notice the bait has been disturbed or taken, it is time to set the trap.

Camouflaging the trap is an effective means to entice the animal.

Place twigs and leaves all over the trap to remove a lot of the glare from the trap. You can even spray it with water and throw dirt on it to give it a conditioned look.

Animals will not be discouraged from entering the trap by the smell of your handling the trap or from supposed machine/oil odors in the manufacturing process.

Have a question about this product?
Q
How does one do away with squirrels in the attic?
A
Getting rid of squirrels that have taken up residence in your attic can be difficult. The only thing that really works is trapping them. You can use a cage trap such as the Havahart 1025 baited with nutmeats or birdseed. Since this is a no kill trap, you need to check with your local authorities to see if(and where) the animal can be released or if it must be destroyed. Once you have trapped and removed the squirrels, you need to figure out how they gained entry and seal up the opening to avoid having more of these pests move in. Most openings that are 2" or less in diameter can be closed with a product such as Stuf-Fit copper mesh and expanding foam. Larger openings may require a fine mesh hardware cloth (available at most home improvement stores) or other suitable material. Be sure to trim back tree branches so that they do not overhang or touch your home. Bushes should also be trimmed, so that they do not touch your home and so that you can see the soil beneath them. Bird feeders should be removed or relocated away from the house to eliminate food sources. By changing the environment around your home, you are making the area less suitable for squirrels and lessening the chance that you will have them invade your home again.

Q
Does the Havahart Cage 1025 Trap catch more than one animal at a time?

Can the 1025 catch more than one animal after it's triggered? How many rats or squirrels can be caught at a time?

A
With the Havahart Cage 1025 Trap, once the trap is triggered, both doors close. The amount of animals caught will depend on how many go in at a time. It will likely only catch one.

You can see the instructions on how to set the Havahart Cage Trap by clicking on the label on the product page or by following the link below to see diagrams and step by step instructions.

Q
Can this small Havahart 1025 trap also be used to trap moles?
A
Since moles spend almost of their time underground it is very doubtful that the Havart 1025 trap would be effective for them. They are also very wary of any changes to their tunnels and would likely steer clear of a large trap being placed underground. We do not have any no-kill traps available for mole control. Please take a look at our mole control page to see a full listing of our mole control products.

Q
Will the Havahart Cage Trap - Model 1025 work to catch squirrels in my attic?
A

Getting rid of squirrels that have taken up residence in your attic can be difficult. The only thing that really works is trapping them. You can use a cage trap such as the Havahart 1025 baited with nutmeats or birdseed. Since this is a no kill trap, you need to check with your local authorities to see if (and where) the animal can be released or if it must be destroyed.

We also have one way door excluders which allows the squirrels to leave the attic but not re-enter using the same hole. It is very important to seal up every hole possible to keep the squirrels out for good.

Please click on the link below for more information on keeping the squirrels out.
http://www.domyownpestcontrol.com/how-to-get-rid-of-squirrels-a-276.html