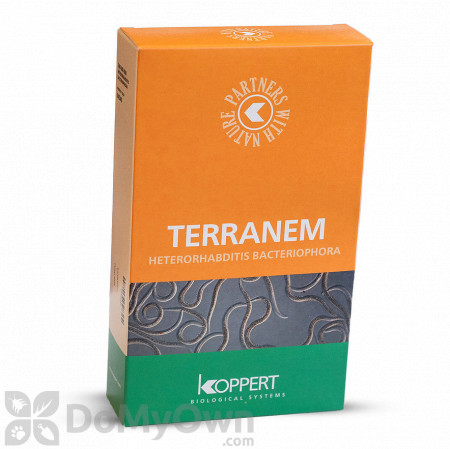 Koppert Terranem is specially designed to help control beetles (grubs) effectively. It contains Heterorhabditis bacteriophora, a type of entomopathogenic nematode (EPN), Thread Worms, which specifically targets larvae of different species of beetles (grubs), particularly garden chafers (Phyllopertha horticola). It's also deemed effective against dung beetles from the genus Aphodius and Serica brunnea, Hoplia spp. It works when the nematodes look for grubs to penetrate them. It feeds on its content, but also excretes specific bacteria from their digestive tracts at the same time. The host tissue will be converted into products by these bacteria, making it easier for nematodes to ingest. The grubs will turn from white-beige to red-brown in color, become slimy and may die within a few days after application.

THIS ITEM CANNOT BE CANCELLED OR REFUNDED ONCE ORDERED

Important!The quantities of this product used should be adjusted to the mode of action of the product and the results that can be expected in the crop in which the product is applied. Your local Koppert consultant or recognised distributor will be able to advise you on the correct use.
Koppert Biological Systems can not be held liable for unauthorised use.