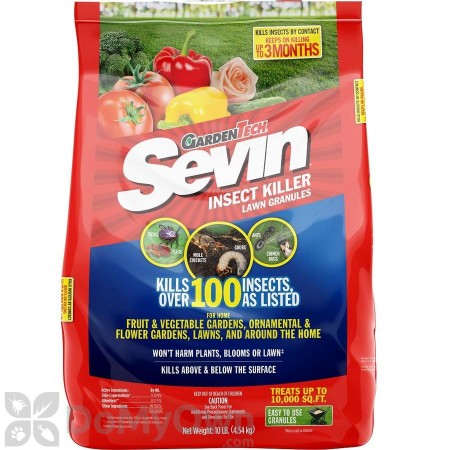 Sevin Lawn Insect Granules is labeled for a wide variety of insect pests and can be used on lawns, ornamentals, in gardens and outdoors around homes. Sevin Lawn Granules has been trusted by professionals for many years to provide control of virtually any outdoor lawn and garden insect pest. Won't harm plants, blooms or the lawn and kills insect above and below the ground surface.

Treat ant mounds by applying 1/2 cup of this product per mound. Water with sufficient force to break its apex and allow the insecticide to flow into the ant tunnels, but not sufficient to significantly damage the mound that may lead to relocation. For best results, apply in cool weather (65 to 80 F) or in early morning or late evening hours. Treat new mounds as they appear. This product will provide control of ant mounds within four hours. Food utensils such as teaspoons and measuring cups should not be used for food purposes after use with insecticide. For optimum control or for heavily infested areas, combine both mound and broadcast treatments.

Irrigate the treated area with up to 0.1 inches of water immediately after application to activate (release from the granule) the insecticide.

Time application for when adult weevils leave their overwintering sites and move into grass areas.

Apply when adult billbugs are first observed during April and May.

Apply during May and July to control the first and second generation of black turfgrass ataenius adults.

Irrigate the treated area with up to 0.25 inches of water immediately after application to activate (release from the granule) the insecticide. Higher applications rates may be required to control populations that contain both nymphs and adults during the summer. In temperate regions, Spring applications will provide control of over-wintered chinch bugs.

Irrigate the treated area with up to 0.5 inches of water immediately after application to activate (release from the granule) the insecticide.

Apply as late in the day as possible to moist soil (irrigate before application if necessary), and water in with up to 0.5 inches of water immediately after treatment. Treat grass areas that receive pressure from adult mole crickets in the spring immediately prior to peak egg hatch when young nymphs are located near the soil surface. Use higher and more frequent applications to control larger, more damaging, nymphs later in the year.

Treat at dusk to prevent outdoor scorpions from entering the building. Treat areas where scorpions reside hidden during the day such as in cracks and voids. Remove trash, debris, or firewood that scorpions may use as resting sites prior to treatment.

Target applications to kill juvenile ticks (larvae and nymphs) in late spring or early summer (May/June). Adult ticks can be killed with late summer and fall applications (August/September). Make applications to lawns, shrub beds, ornamental plantings, wooded areas and around outside perimeters of home and other buildings. Treat entire lawn and perimeter wooded areas and property boundaries where exposure to ticks may occur. Irrigate treated areas thoroughly after application to remove chemical from the granules and move down into thatch. Ticks may be reintroduced from surrounding areas or host animals. For extended control, do not rely on spot applications only. Treat the entire area where exposure to ticks may occur. Use higher application rates when treating areas with dense ground cover or heavy leaf litter. Re-treat if ticks are reintroduced from surrounding areas on host animals. Do not allow use of treated areas during application.

Apply in mid to late-spring to control larvae and nymphs that reside in the soil and leaf litter.

Applications should be made as necessary from mid-spring to early fall to control American dog ticks.

Water-in granules immediately after treatment with 1/2 inch of water. Treat BEFORE damage is seen if previous infestation is known to have been an issue in the area. Lawns should be treated for grubs in late summer and early fall. Inspections can be performed by digging up small sections of sod and examining the soil. If 10 or more grubs are present in a square foot of sod, it is important to treat the lawn.

Apply granules in the summer when beetles are seen. Water granules in immediately after application to ensure they fall through any thatch to the soil.

Have a question about this product?
Q
Is Sevin Insecticide Granules harmful to dogs and cats?
A

Sevin Granules are pet safe when used as directed on the label. After spreading the granules across your lawn they would need to be watered in to activate the ingredients. Once they have been watered in and the water dries, pets and people are can return to the area safely. Normally a safe time frame to wait after watering is 1-2 hours.

Q
How long after treating my yard with Sevin Granules can I take my new puppy out?

She is a beagle so nose to the ground and chewing everything,

A
After spreading the granules across your lawn they would need to be watered in to activate the ingredients. Once they have been watered in and the water dries, your pup will be safe to play/chew to its hearts content. Normally a safe time frame to wait after watering is 1-2 hours.

The Sevin Insecticide Granules label calls for 3 to 7 pounds per 1000 square feet.  If your spreader settings go from 1 to 10 (1 letting out the least and 10 letting out the most) you typically want to be around a 3 setting.  If your spreader goes from 1 to 20, you should probably be around a 6 or 7 setting.  The goal is to just run out of product when you are done walking the 1000 square feet.  One person may walk faster than someone else, so they may place It on a higher setting than someone that walks slower.

Almost all fertilizers, herbicides, insecticides, etc have treatments in amounts of so much product per 1000 square feet.  So if you can figure out what your walking speed is then you know anytime you apply any product that calls for so much of it per 1000 square feet, you always set your spreader on this setting.  You can calibrate this by marking off a 1000 square foot (10 x 100) area and placing 4 ounces of any type of product of similar granule size, or of the extinguish in the spreader.  Start with a low setting and start walking your marked off area at a normal pace.  You can adjust as you go and find the basic setting for you to apply the product over a 1000 square feet.

Q
Can you spread Sevin Insecticide Granules AND weed & feed at the same time? Or should applications be spread out?
A

As long as you are following the application rates on each product label you could use the Sevin Insecticide Granules and a weed and feed product at the same time.