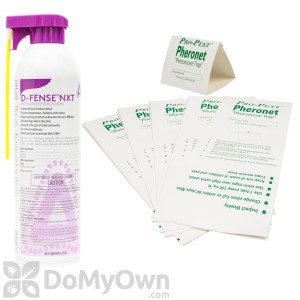 Stored-product pests are usually brought into the home in an infested package of food. Initially, infestations are easy to overlook because the insects involved are quite small, especially in the egg and larval stages. Often the first indication of the infestation is the appearance of small moths flying about or the presence of beetles in or near the food package.

IDENTIFICATION AND LIFE CYCLES
The most common insects infesting food in the home are in the insect orders Lepidoptera (moths) or Coleoptera (beetles). Adult moths and adult beetles are easy to distinguish from each other, but their larvae are a little more difficult to identify. Use a hand lens to examine the legs of the larvae. Beetle larvae are either grublike and legless or have only three pairs of legs, all located close to the head. Moth larvae have three pairs of true legs, plus additional leglike structures further down the abdomen. Both larvae and adults of beetles feed on foodstuffs, whereas only the larval stage of moths consumes stored products.

Meal Moths
Indianmeal Moth. The most common species of meal moths found in the home pantry is the Indianmeal moth, Plodia interpunctella. All damage is done by the larvae, which attack a wide range of products, including cereal and cereal products, flour, cornmeal, rice, dried fruit, dehydrated vegetables, nuts, chocolate, candies, and other confections. When infestations are heavy, mature larvae can often be found in parts of the house far from the original food source because they move quite a distance to pupate.

The Indianmeal moth is a fairly distinct small moth with reddish brown forewings that have a coppery luster on the outer two-thirds and are whitish gray on the inner or body portion. The female moth lays its eggs singly or in groups on food material. Eggs hatch within a few days into small, whitish caterpillars.

Larvae of the Indianmeal moth spin a web as they grow and leave behind silken threads wherever they crawl. When fully grown, the larva is about 1/2-inch long and white with a greenish or pinkish hue. This larva spins a silken cocoon and transforms into a light brown pupa, from which the adult moth later emerges. The Indianmeal moth takes about 6 to 8 weeks to complete egg, larval, and pupal stages during warm weather.

Pantry Beetles
While there is only one major species of moth that feeds on food products in the home, several species of beetles commonly attack a wide variety of foods: the warehouse beetle (Trogoderma variabile); the sawtoothed grain beetle (Oryzaephilus surinamenis) and the merchant grain beetle (O. mercator); the confused flour beetle (Tribolium confusum) and the red flour beetle (T. castaneum); and the drugstore beetle (Stegobium paniceum) and the cigarette beetle (Lasioderma serricorne). Other beetles that feed primarily on seeds or whole grains include the lesser grain borer (Rhyzopertha dominica), the bean weevil (Acanthoscelides obtectus), the granary weevil (Sitophilus granarius), and the rice weevil (S. oryzae). These seed beetles are not covered in detail here, but their management is similiar to the other pantry beetles.

Adult beetles have oval bodies that are about 1/8-inch long with a brown and yellowish pattern on the wing covers. Female beetles lay up to 90 eggs within the infested food. Larvae emerge and feed on the food. Larvae are about 1/4 inch when fully grown and have numerous stiff setae, or hairs, that emerge from dark-colored plates on the last few segments of their abdomen, as well as a tail of long thin hairs that extends from the tip of the abdomen. They are very active and seek out new food sources to infest. In warm temperatures, the entire life cycle from egg to adult can be completed in 45 days.

The setae of this beetle are shed within the infested food product and can be irritating to the mouth, esophagus, and digestive tract if they are ingested; consequently any food found infested with this beetle should be discarded.

Sawtoothed Grain Beetle and Merchant Grain Beetle: The sawtoothed grain beetle and the merchant grain beetle are slender, flat, brown beetles that are about 1/10-inch long. Both beetles have six sawlike tooth projections on each side of the thorax (section between head and abdomen). The sawtoothed grain beetle has smaller eyes than the merchant grain beetle and a larger area just behind the eyes. In both larval and adult stages, these beetles feed on all food of plant origin, especially grain and grain products like flours, meals, breakfast foods, stock and poultry feeds, coconut, nutmeats, candies, and dried fruit; it is not uncommon to find these beetles infesting pet food, bird seed, and rodent bait. The biology of both beetles is nearly identical, and they are managed in the same manner so that it is not necessary to distinguish the two species. The adult beetles live an average of 6 to 10 months, but some individuals may live as long as 3 years. The female beetle of both species drops her eggs loosely among the foodstuffs or tucks them away in a crevice in a kernel of grain. When the small, slender, white eggs hatch, the emerging larvae crawl about actively, feeding here and there. They become fully grown in about 2 weeks during summer weather and then construct delicate cocoonlike coverings by joining together small grains or fragments of foodstuff with a sticky secretion. Within this cell, the larva changes to the pupal stage. Development from egg to adult may take from 3 to 4 weeks in summer.

Confused Flour Beetle and Red Flour Beetle: The confused flour beetle and the red flour beetle are very similar in appearance and can be most easily distinguished by examining the antennae: the antennae of the red flour beetle end abruptly in a three-segmented club, while the confused flour beetle's antennae gradually enlarge towards the tip, ending in a four-segmented club. Adult beetles of these two species have shiny, reddish brown bodies that are about 1/7-inch long, flattened, and oval. These beetles have a very wide food range including cereals, damaged grains, grain products, shelled nuts, dried fruit, chocolate, drugs, and herbarium and museum specimens.

The biologies of these two species are very similar; their average lifespan is about 1 year, but some have been known to live almost 4 years. The females lay their small, white eggs loosely in flour or other food material. The eggs, which are coated with a sticky secretion, become covered with flour or meal and readily adhere to the sides of sacks, boxes, and other containers. They hatch into small wormlike larvae that are slender, cylindrical, and wiry in appearance. When fully grown, the larva is 3/16-inch long and white, tinged with yellow. At this stage, it transforms into a small pupa. At first white, the pupa gradually changes to yellow and then brown, and shortly afterward transforms into a beetle. In summer, the period from egg to adult averages about 6 weeks.

The cigarette beetle feeds on cured tobacco, cigarettes, and cigars. It also feeds on dried herbs, spices, nuts, cereals and cereal products, dried fruit, seeds, and animal products such as dried fish and meats, hair, and wool. In the home this beetle is most commonly found in pet foods, cereals, nuts, and candy. It may also infest dried pepper arrangements, wreaths, and spices such as chili powder or paprika.

The cigarette beetle lays its eggs in the food substance. The small, yellowish white grubs are covered with long, silky, yellowish brown hairs and are about 1/6-inch long when fully grown. The pupae are within a closed cell composed of small particles of the food substance cemented together with a secretion of the larvae. The period from egg to adult is about 6 weeks.

The drugstore beetle is a very general feeder, attacking a great variety of stored foods, seeds, pet foods, spices, and pastry mixes, and has been said to "eat anything except cast iron." It gets its name from its habit of feeding on almost all drugs found in pharmacies. In the home, however, the most common food materials infested by this beetle are pet foods, drugs, and cereals. The drugstore beetle lays eggs in almost any dry, organic substance. After hatching, the small, white grubs tunnel through these substances and, when fully grown, pupate in small cocoons. The entire life cycle may take place in less than 2 months.

3 of 7 people found this article informative and helpful.