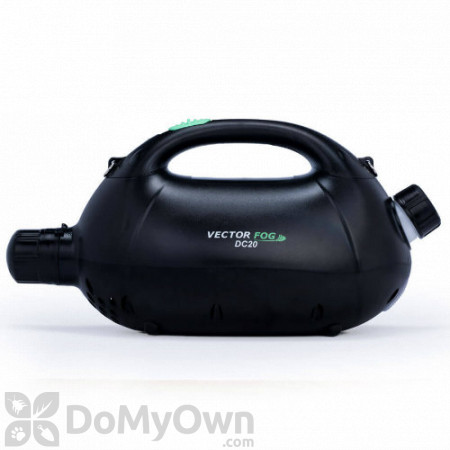 Vector Fog DC20 Cordless ULV Fogger is a cordless ULV fogger which is designed to make application much easier. Featuring the latest in battery technology, it produces up to 40 minutes of uninterrupted fogging time even with just three hours of charging period. It includes a half gallon (2-liter) tank plus 12-volt DC motor from LG electronics and an adjustable nozzle which produces droplet sizes of about 5 to 50 microns and a flow rate of 10 to 20 LPH. This fogger is perfect for small places because of its compact design so it is ideally used on residential properties, food preparation areas, offices, cars, and valets. Additionally, the noise level can be reduced to half so it is ideal on areas which requires discretion such as schools, hospitals, and nursing homes.

Have a question about this product?
Q
Temperature Vector Fog DC20: Is the temperature kept below 40 degress celsius while using the fogger?

Is the temperature kept below 40 degress celsius while operating the DC20? And can it be connected to electricity so it can fog for longer than 40 min at a time? I am living in Norway, do you ship for free to Norway?

Typically you would not use a fogging machine such as the Vector Fog DC20 if temperatures are over about 90 degrees F (32 degrees C). This fogger is designed to be used wirelessly and charged between uses. The C20 has a 1 hour run time at full charge.

We can only ship within the US.

Q
Can you buy replacement batteries for the Vector Fog DC20 Cordless ULV Fogger?
A

We do not currently carry any replacement batteries for the Vector Fog DC20 Cordless ULV Fogger and would recommend contacting Vector Fog directly for replacment battery. They do offer a 1 year warranty for manufacturer defect with their foggers. Vector Fog can be reached at 1-844-780-6711.