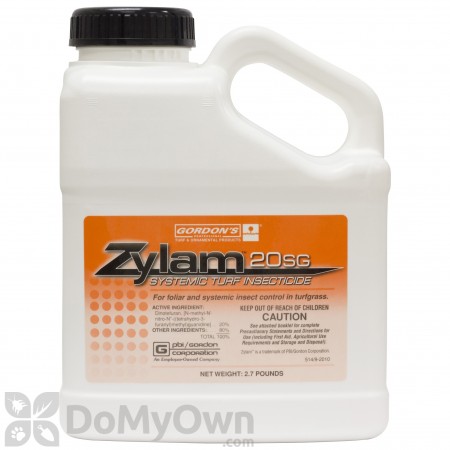 This product works systemically to control some insects in as little as two days. Zylam 20SG Systemic Turf Insecticide travels from the soil into the plant, and will move in a translaminar fashion from the top of the plant to the bottom.

Zylam 20SG Systemic Turf Insecticide is a dust free and easy to mix soluble granule. One 2.7 lb. jug will treat one acre and should be watered in after it has been applied to turf.

Target timing of Zylam 20SG Systemic Turf Insecticide applications at or just prior to or during egg laying of the target pests. The need for an application can be based on historical and/or physical monitoring of the site, current season adult trapping, previous experience or other methods. Optimum control will be achieved when applications are made prior to or at egg hatch of the target pests followed by sufficient irrigation or rainfall to move the active ingredient through the turf thatch layer. Consult your State Extension Service for information regarding specific application timing.

Have a question about this product?
Q
How many teaspoons or ounces of Zylam 20SG Systemic Turf Insecticide do I need per gallon of water?
A

Q
I see there are two different Zylam products at two different prices. What is the difference?
A
Zylam Liquid Systemic Insecticide has 10% of the active ingredient Dinotefuran while the

Zylam 20SG Systemic Turf Insecticide has 20% so it is a bit stronger.

1 of 2 people found this answer helpful

Q
In treating ficus trees for whitefly, does it make a difference if you use the Zylam Liquid or the Zylam 20sg?

What is the mix ratio of the granular Zylam 20sg per gallon of water?

Zylam 20 SG is labeled specifically for use on lawns and is not labeled for use on shrubs or trees. We recommend you use Safari 20 SG which contains the same active ingredient and is labeled for this use. You will need to use 1.25 - 2.5 level teaspoons per foot of height of the shrub. You will use the volume of water that is convenient for you and that your soil will accept. See below for a broader explanation:

Most people use a 5 gallon bucket or a large watering can to apply Safari as a soil drench. You will need 1.25 - 2.5 level teaspoons of Safari per foot of shrub height or 1.25 - 2.5 level teaspoons per inch of trunk diameter for trees. The amount of water that is used will vary depending on soil conditions and volumes that are easy for applicators to use. The minimum amount of water that should be used is 1 pint per foot of shrub height (or inch of trunk diameter for trees) but you may use 1 quart -1 gallon of water per foot of height (or inch of trunk diameter for trees) as well. Denser soils such as clay do not accept water as readily, so the lower volume of water is suggested.  Since sandy soils can accept more water, using the higher volume of water is preferred. Note: Water simply acts as a carrier and it is important that even distribution of the product is achieved. Thus, more water may be used if the applicator feels runoff will not occur and proper penetration of the root zone is achieved. Insecticides applied to the soil are taken up by the roots and translocated throughout the tree or shrub. Root/soil drenches offer the advantage of requiring no special equipment to apply (other than a bucket or watering can). However, surface layers of organic matter, such as mulch or leaf litter, can bind the insecticide and reduce uptake. Before applying drenches, it is important to remove or pull back any mulch or dead leaves so the insecticide solution is poured directly on the mineral soil. It is also important to keep the soil around the tree or shrub moist for the next 7-10 days after applications to encourage uptake. We also recommend using a product with an active ingredient that is different than the soil drench for a foliage application while you are waiting for the Safari to translocate through the ficus. Talstar P is the most popular choice for foliage application on ficus for white fly.