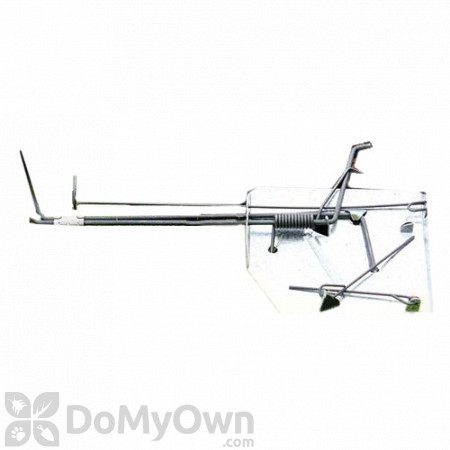 CINCH Traps have been a favorite solution for professional trappers, ranchers, farmers, and homeowners for more than 100 years. Every CINCH Trap is manufactured in Oregon where they take product quality and service very seriously. The traps come in small, medium, and large sizes.

After you have set your Cinch traps leave the hole open, air movement is important. In the event you have concerns about the open hole, just put a bucket or a small piece of wood over the hole leaving room for air movement.

If you think your trap has the scent from a predator you should clean them with soap and water and lightly spray with CINCH Maintenance Spray. This process will eliminate any scent on the trap. Predator (mostly dogs and cats) scent will alert moles and gophers to danger and they will plug the trap.

Using flags to mark your set is a great idea, especially when setting several sets. Always remove all traps from the area when doing ground maintenance. Traps and tractors do not work well together.

Question- I received the mole traps, followed the directions, overnight the trap was sprung and I pulled the trap out it was empty. Thoughts?

Answer- Sometimes when you set the trap, if there is a bend in the tunnel the mole can get by and then can set the trap from the back and will back fill the hole with dirt. When you set the trap get a long dowel or stick and make sure the tunnel is straight, long and really cleared out. That way you know they won't be able to get around your trap. If they get around the trap they can push the dirt onto the plates which will set off the trap.

Question- Do I have moles or gophers?

Answer- There are several ways to identify what you have working in your yard. First, let’s look at the food source; moles eat bugs, grubs, and worms. Gophers on the other hand, eat vegetation, roots and grasses. Take a good look around your area to identify the food source. Second, let’s look at your above ground activity. Moles will have a perfect mound of soil; very seldom will you see any open holes. Moles will also leave a raised tunnel system just below the sod. Gophers will have a lower mounding of soil in a horse shoe shape; many times you may see an open hole in the center of the activity. Identifying you activity is important to achieve control. The Cinch mole and gopher traps are of different sizes and the proper trap is critical for your success.

Question- How do I know what size trap?

Answer- Find the tunnel, which means digging down past the mound and get to the tunnel that is parallel to the surface. That is the animals run or main tunnel. That is where you will be putting the trap. The jaws of the trap when set, should fit snug into the tunnel. It is better to get a slightly larger trap than your tunnel size than too small. Make sure the jaws are not resting at a bend in the tunnel, because then the animal can get around the trap as well.

Question- I set two traps one in each direction, and the animals covered them with dirt, and the trap wasn't sprung. What am I doing wrong?

Have a question about this product?
Q
Do the Cinch Traps Gopher Traps work for moles?
A

Yes, you can use Cinch Gopher Traps to catch gophers or moles. Be sure to follow the setting instructions on the product label and to check your traps frequently.