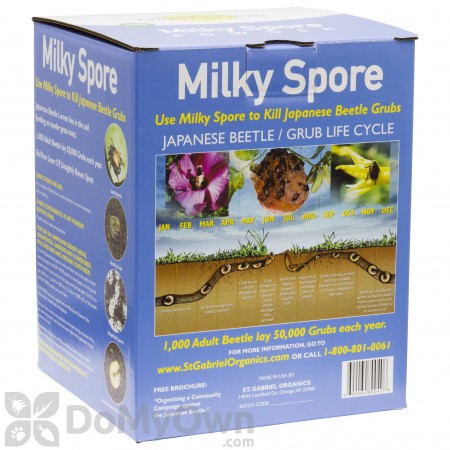 Milky Spore Powder is a natural, safe, effective grub control product that can remain in the soil for up to twenty years. This is an OMRI certified organic control of Japanese beetle grub control that is safe to use with other herbicides and insecticides that is safe to use around birds, bees, pets and fish and around pools and ponds. Milky Spore Powder contains Bacillus popillae, a bacterium that kills grubs by multiplying inside the grubs, causing them to die. The spores are then dispersed in nearby soil, which is how the product is able to exist in your soil for so long and even comes with a five-year guarantee.

Please note: Your Milky Spore will arrive in a clearly labeled box. Inside that box will be a white bag that is flipped inside out that has Milky Spore printed on it. The manufacturer, St Gabriels Lab, is a very environmentally conscious company. They had too many bags for a different product that they produce and instead of throwing them away, they opted instead to flip them inside out and use them for the milky spore. This helps keeps costs down for everyone and keeps the bags from being wasted needlessly.

1. How fast does the Spore work and how long does it last?
Milky Spore begins working as soon as it is applied as long as grubs are feeding. Once grubs are infected they will multiply the Spore by several billion times and spread it further. In warm climates good control can occur in one to three years. In colder areas like New England, three to five years. Once established in a lawn, Milky Spore has been known to last 5 to 10 years.

2. Will freezing ruin the Spore? What about heavy rain?
No, Milky Spore is not affected by freezing or other adverse environmental conditions. Heavy rain may wash away newly applied Spore dust necessitating retreatment.

4. Can I use it in the vegetable garden?
Yes, Milky Spore is harmless to food crops. It is not a chemical pesticide. It may be used in gardens, around pools and wells.

5. Should we keep our pets off the lawn?
Milky Spore does not affect pets, beneficial insects, fish, bees, birds, other animals, plants, or man. It is not a poison.

7. Can I cut my grass after applying the Spore?
Do not mow or rake your yard until Milky Spore has been soaked into the soil.

8. What if I treat my yard and my neighbor does not?
Your lawn will be protected even if you are surrounded by untreated property. Eventually, the Spore will creep next door into adjacent areas by natural movement.

9. Won’t beetles fly in from my neighbors yard?
An adult beetle feeds only during it’s first two weeks. By the time they fly in from adjacent areas, any new grubs laid in late Summer will be affected by the Spore.

10. What about Moles?
Eliminating grubs with Milky Spore often cause Moles and Skunks to feed elsewhere. Unfortunately, they may head for your neighbor’s untreated yard instead. Milky Spore does not affect moles, it simply eliminates their food source.

11. Can I have too many grubs?
If you are rapidly losing your lawn due to too many grubs, more than 10 per square foot, you may be wise to use an insecticide along with Milky Spore.

12. How do I know if I have beetle grubs?
Grubs feed on the roots of your grass which can become brown and die. Simply lift the dead grass and look for white larvae curled into the shape of a “C” about the size of a penny. Active grubs can completely destroy a lawn. Use Milky Spore for safe, long-lasting control.

13. Do beetle larvae feed more aggressively in Fall?
Yes, grubs in fall are in the first instar stage and are feeding for growth to store body fat for winter. In the spring, grubs reach 3rd instar prior to molting and do not require as much food.

14. Are grubs infected by Milky Spore in spring when rising to the surface following hibernation?
Grubs become infected by swallowing a spore. They do not become infected by rubbing up against spores or passing through them. Since grubs feed less in Spring, the incidence of infection is not as great as in fall.

15. What are the application rates for Milky Spore?
Milky Spore Powder in cans is a one time application put down in spots in measuring teaspoon amounts every four feet apart creating a checkerboard pattern of spots throughout your yard. Each spot contains 100 million spores.
Milky Spore Spreader Mix in bags is applied with a drop spreader over every square foot of grass and requires six applications usually Spring and Fall for three years to build the number of spores in any one area to millions of spores.

17. Can I wait to water in the Spore?
Yes, you can wait 36 to 48 hours before watering in the Spore. Make sure you water the Spore before raking or mowing your lawn. The whole idea is to soak the Spore into the soil where it will become available to grubs feeding on the roots of grass. Simply use an oscillating hose sprayer for 15 to 20 minutes over the entire treated area. There may still be some white residue but this is chalk used as carrier for the spores.

18. What is the difference between the Spreader mix and the powder?
The main difference is that in using the six part spreader mix program you are essentially spreading the spore over an entire lawn rather than in concentrated areas. In doing this the number of spores in any one location is significantly less than the concentrated spot method.
Grubs become infected by swallowing a spore and this occurs by happenstance when feeding on grass roots. The more spores in a given area, the greater chance for infection. Each infected grub dies and releases 3 billion new spores into the soil.

19. How do I know if I have Japanese Beetle Grubs?
St. Gabriel Laboratories provides a free grub analysis for it’s customers. Simply place six grubs in a non-crushable container with some moist earth and grass roots. Don’t punch any holes in the container as grubs do not need much air. Send the container to: Free Grub Identification Program St. Gabriel Laboratories 14044 Litchfield Drive Orange, Virginia 22960 Tel: (880) 801-0061

20. What is the shelf life of Milky Spore?
The older the Spore, the more effective it becomes.

21. What if I get Milky Spore in my eyes? What if I breathe it in?
Milky Spore itself is not toxic. However, Milky Spore contains chalk and a powder carrier. Care should be taken not to get any dust in one's eyes as it is an irritant.

Have a question about this product?
Q
Will milky spore harm earthworms?

I have an edible garden with rich soil, likely due to my vast number of earthworms. I want to get rid of the grubs, but I do not want to harm my earthworms. Can Milky Spore help me with that?

A
Milky Spore will only harm Japanese Beetle Grubs and will have no effect on any other insect.

Q
With milky spore, it takes 3 to 5 years. Should I use another product in addition to get faster results?
A
No. Do not use any other products for grub control when using milky spore. It does take up to 2 years to see the full effect of the product but it will start working on the grubs right away. When you apply Milky Spore the existing grubs must eat the spores and digest them which in turn will multiply and spread the spores. If you kill off the existing grubs the spore will not have a way to multiply.

Q
My lawn is now just dirt and dead grass; does it matter when I apply Milky Spores? Should I still apply it?

I plan on reseeding in the Fall because there is no grass there now is it worth putting Milky Spore down (I am assuming no new eggs will be laid on just dirt.)

A
Milky Spore can be applied any time the ground is not frozen. That being said, the spore can only reproduce and spread when grubs eat it. If there are no grubs at the time of application the Milky Spore will not be able to reproduce and move through the property.

Q
What would be the best way to apply Milky Spore Powder, and what amount do I need?

You will need 4 of the 40 oz boxes of the Milky Spore Powder for a 40,000 sq ft area. You should use the Milky Spore Lawn and Garden Dispenser for the correct application method. You will apply one shake of the dispenser in spots every four feet in rows four feet apart. This is considered a checkerboard pattern.