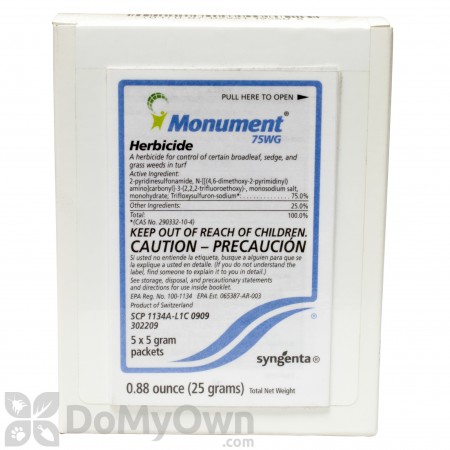 Monument 75WG Herbicide, a sulfonylurea, is a selective post-emergence herbicide that controls a wide variety of weeds including the majority of sedges, oxalis, green kyllinga, and multiple other species of broadleaf weeds and grasses. Use Monument 75WG Herbicide on warm season turf in commercial settings such as sod farms, commercial property management, and golf courses. Weed control by Monument 75WG Herbicide is greatly improved when the soil has enough moisture and weeds are actively growing. See label for complete details.

The degree of control resulting from application of Monument 75WG is primarily dependent upon weed species, weed size at application, environmental conditions, amount of Monument 75WG applied, and growing conditions. Weed control is greatly improved when weeds have emerged, ample soil moisture exists, and weeds are actively growing, than when the soil is dry and weeds are under stress from lack of moisture.

Growth of susceptible weeds is inhibited soon after application of Monument 75WG. The leaves of susceptible plants normally turn yellow, red or purple after several days, followed by necrosis and death of the growing point. Complete plant death occurs 1-3 weeks after application, depending upon weed species, growing conditions, etc.

Monument 75WG controls weeds by inhibiting (stopping) a biochemical process that produces certain essential amino acids necessary for plant growth. The inhibited enzyme system is acetolactate synthase (ALS). Certain weeds species have naturally-occurring biotypes within the population that are resistant to ALS-inhibiting herbicides. Applications of ALS-inhibiting herbicides used alone in the same area(s) continuously over a number of years can lead to an increase within a weed population of the ALS-resistant biotype(s). This, in turn, may reduce the utility of ALS-inhibiting herbicides for controlling entire populations of that particular weed species. To prevent or delay a build-up of ALS-resistant weed species biotypes, weed management programs should include the use of appropriately registered herbicides, for use on turf and for control of these weeds, with different modes of action (MOA’s) within the same year, or sequential years. Hand weeding before weeds set seed may also be helpful in reducing the build-up and spread of herbicide-resistant biotypes.

Have a question about this product?
Q
What can or will replace Monument 75WG?
A

Monument in the small packets was discontinued. The same product is now available only in the larger box of 5 x 5 g packs here. Please let us know the plants you are targeting along with your desirable turfgrass and how large of an area treating if you would like us to recommend an alternate product.

Q
How much area will the 5x5 packets of Monument 75WG cover?
A

Monument 75 WG has multiple ranges of mix rates on the product labe based on the turf type you are spraying over and the target weeds. You would use anywhere between 2-3 packets on average per acre based on the weeds you need to eliminate. On average you should use at least 50 gallons of water per acre when doing an application which is at least 1 gallon of water per 1000 sq/ft.

Q
What herbicide can replace Monument?
A

We do still offer Monument 75WG Herbicide  just in a different quantity.

Q
Can Monument 75WG Herbicide be applied to Bermuda for treating poa annua?
A