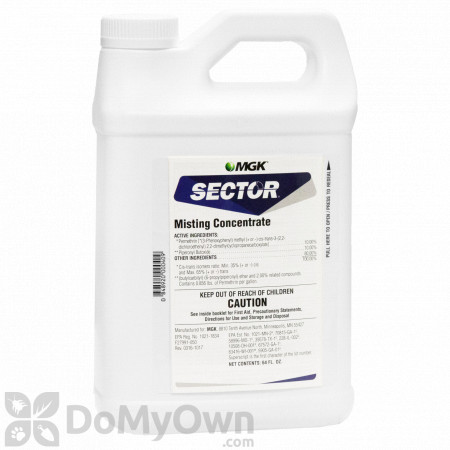 Sector Mosquito Misting Concentrate is a water-based insecticide designed specifically for misting systems.  Sector provides quick knockdown, kill and residual control of flying insect pests including mosquitoes, flies and other insects. It is ideal for high mosquito populations or hard to kill insects such as gnats, biting midges and no-see-ums. The combination of Permethrin with PBO provides a extra punch that kills insects fast. The residual of the chemical will not harm most common ornamental plants and shrubs, so the product is safe for use in backyards near lawn and landscape areas. Can be used in automatic spraying systems, ULV foggers, mosquito misting systems, cattle barns, animal quarters, dairies, poultry houses, warehouses and more.

FOR PET USE – USE ONLY ON DOGS

Do not use in food areas of food handling establishments and restaurants or other areas where food is commercially prepared or processed. Do not use in serving areas while food is exposed or facility is in operation. Serving areas are areas where prepared foods are served such as dining rooms, but excluding areas where foods may be prepared or held. In the home, remove all exposed food and cooking utensils. Cover all food processing surfaces or wash thoroughly after treatment and before use. Cover or remove exposed food.

Animals and Animal Premise Use Areas

Have a question about this product?
Q
Can you help me to choose between Sector and Riptide for use in Automatic Misting system?

I have a MistAway automatic misting system on my home and am trying to choose between using Riptide or Sector in it this season. I have no pets but do have two small children (who are not outside at misting times). I see that Sector has a residual. How long is the residual effect of Sector? It seems that Riptide is ~40% more expensive than Sector. What benefits am I getting for the higher price of Riptide? Is the higher price just because it is naturally based vs. man-made insectide?

Riptide and Sector are our most popular products for use in automatic residential mosquito misting systems. The biggest difference is that Riptide has 5% all-natural pyrethrins, while the active ingredient in Sector is permethrin, a synthetic version of pyrethrin. Pyrethrin does have the advantage of being a natural active ingredient, and it offers the fastest knockdown of target insects. Riptide is also a water-based concentrate, so it does not contain the oils that permethrin products such as Sector will contain. The primary advantage of permethrin (Sector) is that it is less costly. Sector may give you residual of 1-2 days in areas without direct sunlight.

20 of 23 people found this answer helpful

Q
Can Permethrin SFR be used in an misting spray system in a horse barn?

We have a 55 gallon fly spray system set-up on a timer. Can this be used--if yes, how much would I need to fill the 55 gallon tank???

14 of 17 people found this answer helpful

Q
What is the strongest chemical to get rid of mosquitoes?
A
Sector Misting Concentrate would provide excellent control and offers a quick knockdown.

12 of 13 people found this answer helpful

Q
I have a 55 gal drum misting system in my horse barn. What is the difference in Riptide, Sector, and Pyranha?

What is the difference in effectiveness as far as killing flies?

Pyranha 1-10 PX is a mosquito system that has the two active ingredient are permethrin and piperonyl butoxide. It should not be used in a propane or thermal fogger. There is no residual with this product.

Sector Mosquito Misting concentrate has the same active ingredients as Pyranha with the same amount of the active ingredient. It is a water based insecticide that can be used in automatic spraying systems, ULV foggers, mosquito misting systems, cattle barns, animal quarters, dairies, poultry houses, warehouses and more. Sector does have a residual effect.

Riptide is a water based misting concentrate with 5% pyrethrin. Riptide Waterbased Pyrethrin ULV is new technology that delivers effective control of a wide range of insects including mosquitoes, stored product pests, cockroaches, biting insects, crawling insects, flies and more without oil residues or oil-related issues. This product does not have any type of residual.

They will all be very effective in working to kill pests. If you are looking for a longer lasting product, we would recommend using Sector.

11 of 12 people found this answer helpful

Q
Would Sector Misting Concentrate be more effective to treat mosquitoes than using the combination of Bifen IT, Exponent, and Nyguard?
A

Sector Misting Concentrate works good on mosquitoes for a quick knockdown and does have a residual. With the active ingredients of 10% Permethrin and 10% PBO, it is most commonly usd in misting systems. Sector has 2 of the 3 products we recommend for mosquito control and works great for enclosed areas such as barns and stables.

For outside treatement in a yard, camping area, etc. the combination of Bifen IT, Exponent and Nyguard IGR will be more effective becasue you are using all 3 modes of action. Along with the synergist Exponent for a fast knockdown(24hrs), you have the 30 day residual of Bifen IT and the IGR to stop the development of juvenile stages of mosquitoes.

11 of 12 people found this answer helpful