Spiders are often the stuff of myths and legends. There are so many stories surrounding these eight-legged creatures. From scary anecdotes involving fangs and venom to wives tales explaining behaviors, there is a lot of misinformation about these benign insect-eaters. Since it has been said that you’re never more than ten feet away from a spider, it’s good to know what is true and what isn’t. 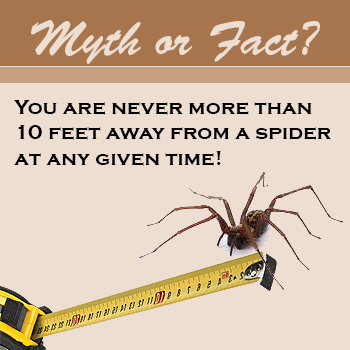 Here are some of those myths and the facts behind them to help you know a bit more about spiders.

Myth: Daddy long legs are the most venomous spiders, but their mouths are too small to bite humans.

Fact: This is a very widespread myth that almost everyone has heard, but has very mysterious origins. Daddy long legs are not actually spiders at all, making this myth completely false. Daddy long legs are also called harvestmen and belong to a group called opiliones. They have crab-like mouthparts do not have fangs like spiders.

Myth: Spiders have been known to lay eggs in the wounds they make in people’s skin.

Fact: Many people have heard a version of this story. A lady gets bitten by a spider and weeks later, a pimple like protrusion bursts and baby spiders come running out. As gross as this is, it is completely untrue. Your skin is not a suitable home for spider eggs, and spider biology does not work that way. Spiders usually create sacs to lay their eggs and keep the sac close by.

Myth: Spiders are often in our beds; that is why we always will wake up with spider bites on our skin.

Fact: Many of us have woken up with a mysterious big, red welt that resembles a bug bite. The mystery bite is often blamed on a spider. However, it is extremely rare for spiders to be in your bed. Unless your bed is on the floor in a basement or crawl space, spiders don’t see your bed as a potential hot spot for food. Spiders have no reason to bite humans unless they are very closely handled and pressed against the skin. Bumps and bites you wake up with are most likely from non-biting skin conditions or other insects (don’t rule out lice, mites, and bedbugs if you’re seeing bites frequently).

Myth: All spiders are poisonous and will create harmful and potentially dangerous wounds.

Fact: While all spiders do have venom to consume their prey, it is very rare for a spider’s venom to affect humans in a detrimental way. Spider bites will often feel like a general insect bite with swelling, itching, and redness. Black widow spiders and brown recluse spiders are two spiders you should be wary of, but those are very rare in most cases.

Myth: We swallow spiders in our sleep.

Fact: This myth varies in numbers, from 4 a year to 20 in a lifetime, but there is no basis of fact or proof to this myth. Many unlikely circumstances would have to align in order for a spider to enter your mouth (and you to not wake up), and for you to swallow it. Your mouth is not a habitable place for a spider, and spiders generally avoid humans.

Myth: Spiders can enter your home through sink and shower drains, so this is why you often see spiders in bathrooms.

Fact: Modern plumbing doesn’t allow this to be possible, and drainpipes are generally unfriendly environments for spiders, offering minimal food. House spiders need a lot of water, so they often travel into bathrooms to drink out of residual water in drains.

Fact: Since tarantulas are so large, they are pretty scary creatures. They are often cast as the deadly monster in the movies and so many of us would be terrified if a tarantula made its way into our homes or worse. However, despite their large size, most tarantulas’ venom has very low toxicity to humans. In some cases, the bites might be a bit more painful because of the larger jaws, but the bites will usually affect you in the same way as a smaller spider.

The following statements are confirmed facts about spiders:

The following statements made about spiders are not confirmed facts, but have been passed around the web. We're leaving it up to you to decide if they are facts or myths. In any case, they sure are fun to read!