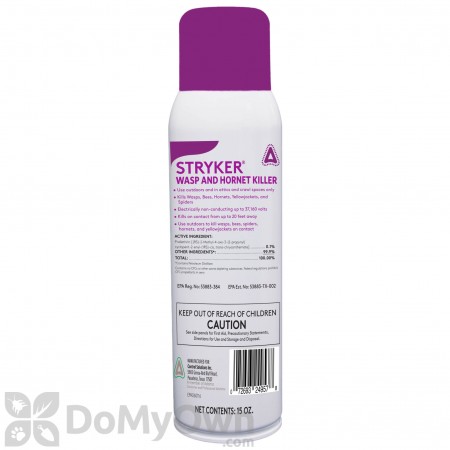 Stryker Wasp and Hornet Killer kills on contact from up to 20 feet away. It knocks down hornets and wasps so quickly that they do not have time to release their stinging pheromones, which in turn reduces the possibility of the applicator being stung. Stryker Wasp and Hornet spray is for use outdoors, in crawlspaces, and in attics. It is electrically non-conductive at up to 37,160 volts which makes it perfectly safe to be used around electrical equipment. The long lasting residual activity of the spray will provide a complete elimination of the nest.

Hold container in upright position. Stand at a safe distance, 6 - 15 ft from the nest, and not directly underneath. Align nozzle valve opening with the mark on the valve cup. Aim the nozzle valve opening toward the nest with the wind at your back. Treat the nest until thoroughly wet. Contact wasps and hornets on the nest with spray when possible. The best time of day to treat is in evening or early morning, since wasps and hornets congregate on or in the nest at night.

Locate nest. Align nozzle valve opening directly opposite the mark on the valve cup. Press down on the actuator and apply, using a sweeping motion, contacting any stimulated or stirred-up yellowjackets and bees around the nest opening. Then move forward to the nest opening and apply for 6 - 8 sec directly into the nest hole.

Apply directly to spiders and/or webbing. Before applying, consider the surfaces that spray may contact if concerned about potential staining.

Have a question about this product?
Q
Will Stryker Wasp and Hornet Killer kill cicada killer wasps?
A

Stryker Wasp and Hornet Killer will kill wasps on contact up to 20 ft. away.

For cicada killer wasps, it is commonly recommended to use Delta Dust in each individual burrow. Cicada Killer wasps thrive in disturbed environments, such as landscaped yards and places where bare soil is exposed. You can discourage the wasps from nesting in your yard by cutting your grass on the highest setting and by adding a thick layer of mulch to flower beds during the Cicada Killer Wasp season. These wasps do not like over-saturated lawns either, so over watering during their season will help prevent them. Unfortunately, there is no foolproof way to prevent cicada killer wasps.

We also like to let our customers know that the Cicada Killer wasps are beneficial insects that provide free pest control for a couple of months each year. Cicada killer wasps paralyze and provision their burrows with other insects to feed their young.  The beneficial Cicada killer wasps, while large and intimidating to see, are mostly harmless and there have been very few reports of anyone getting stung by just being near them. In most cases where a sting was reported, the wasps were being held or molested in some way. Cicada Killer Wasp stings are also reported to be almost painless.

Q
What if you can’t spay the nest with Stryker Wasp and Hornet Killer? Will it kill wasps that walk where it was spayed?
A

Stryker Wasp and Hornet Killer is a product that kills on contact and it does not offer a residual. If you are wanting a product to use that will leave a residual or continue to kill after it has dried, Cyzmic CS would be a great choice. We also have a great guide on How To Get Rid of Wasps.