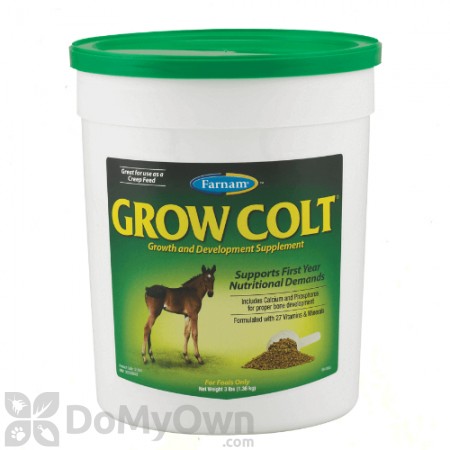 To aid in maximum growth and development, add 2 ounces of Grow Colt supplement to daily ration for each foal. Continue feeding daily throughout the foal’s first year of development. Provides 27 important vitamin and mineral nutrients.

To avoid setbacks resulting from weaning and to speed early development, the foal should be given some supplementary feed while still nursing the mare. Usually the foal can start eating small amounts of feed when he is two to three weeks old. Creep feeding - in which the newborn foal can feed on grain and hay separately from the mare - is highly recommended.

Foals are usually weaned at four to six months of age. At weaning, separate the foal from the mare and feed him 1 to 1 1/2 lbs of hay per 100 lbs of body weight. Also feed 2 ounces of Grow Colt supplement daily. The weaning period is the most critical time for feeding the growth supplement. Similarly the grain ration is quite critical.

Feed 3/4 to 1 lb of grain daily with fresh legume hay:

You can also add brown sugar to each of these rations to encourage the foal to start eating grain as early as possible. Your choice of rations will, of course, depend on the cost and availability of various grains.

FOR USE IN HORSES ONLY.