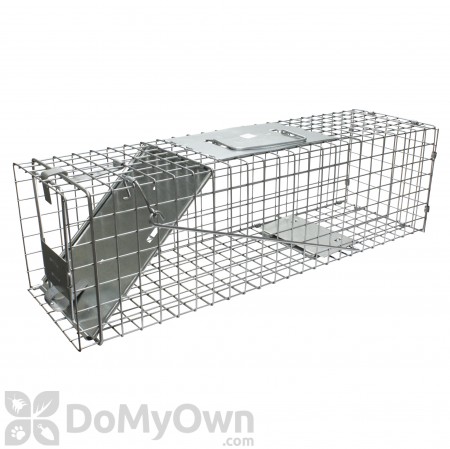 The Havahart #1078 cage trap measures 24" x 7" x 7" and is suitable for trapping skunks, squirrels and rabbits. Easy to bait, set and release, this high tensile wire mesh trap is steel reinforced for long life and maximum resistance to damage. The smooth inside edges are for the protection of the animal, while the gravity-action door has sensitive triggers to ensure a quick, secure catch. Click on the "product label" link under the picture to the left for use instructions.

2 Door Trap The following tips should be used when preparing to live catch your nuisance animal.

Following the instructions contained in the carton, you may want to test the trap and spring it a few times to make sure that it works properly. For example, spring it by touching the trip plate from each end, This should be done also after the trap has been set and camouflaged to make sure it works freely. If you feel the doors do not work fast enough, place small stones or other weights on top of the door. This will cause doors to drop faster.

When you receive the trap it will be bright and new. Therefore do not be discouraged in case you do not catch what you anticipated the first night or day. The effectiveness of Havahart traps usually improve with age. Some animals do not mind a new trap while others do. So instead of setting the trap to catch the first animal to come along, bait the trap, or simply place it where you intend to set it and fasten the doors open by means of a stick or wire.

After a couple of days, when you notice the bait has been disturbed or taken, it is time to set the trap. Camouflaging the trap is an effective means to entice the animal. Place twigs and leaves all over the trap to remove a lot of the glare from the trap. You can even spray it with water and throw dirt on it to give it a conditioned look. Animals will not be discouraged from entering the trap by the smell of your handling the trap or from supposed machine/oil odors in the manufacturing process.

The following are good bait suggestions for squirrels:

The following are good bait suggestions for skunks:

Have a question about this product?
Q
What should I do with a skunk or animal that I caught in a Havahart trap?

I have a skunk in the Havahart trap! Now what? How do I get it out of the trap without having to bathe in tomato juice?

A
Once you discover a skunk, you will need another cloth, large enough to completely cover the Havahart trap, and a brick or object that is tall and wide enough to keep the trap door open at least 5 inches but one that won’t block the skunk’s escape. With this equipment in hand, quietly approach the trap from the cloth side (so the skunk can’t see you), holding the large cloth in front of you. Gently drape the cloth completely over the cage. Get the object that you will use to keep the door open. (Some spring-loaded traps actually have a device to do this.) When you are ready, take a quick peek to make sure the skunk is at the opposite end of the trap. Chances are he will be facing you as the noise will peak his interest. Quickly open the door and prop it open. As you walk away, take the large blanket with you. Keep the blanket open between you and the trap as you quietly and methodically back away. While it is possible for the skunk to bolt out of the cage, it rarely happens. Usually, the skunk remains in the covered portion of the trap until he feels safe enough to walk out. Don’t be surprised if he remains in the trap until nightfall. Be sure to check with your local authorities to see where or if the animal can be released.

6 of 8 people found this answer helpful

Q
Can I prop the door open on the Havahart Cage Trap Model 1078?

I need to trap my semi-feral cat to move her to my new home. How do I prop it open without setting the trap?

You can lift the door of the Havahart Cage Trap Model 1078 and hold it in place with a stick to allow animals to exit on their own. For trapping, however, we would suggest following the manufacturer's instructions and setting the one-way door with food inside to intice the animal. Trapping will be most effective when you know the animal is hungry.

3 of 6 people found this answer helpful

Q
Best baits for rabbits?
A
Rabbits are strict herbivores that feed mainly on grasses, leafy greens, root vegetables and some fruits. If you have a garden, identify what types of foods your rabbit is stealing and use those as bait to lure rabbits inside your trap. Some of the best baits for rabbits are apples, brussel sprouts, carrots and lettuce.

The lock does not lock the cat gets out each time.

We do not have a video for how to set the Havahart Cage Trap – Model 1078, however there are instructions with pictures that you can view here. If you are still having trouble, then you can also contact Havahart directly at 1-855-5-HAVAHART.

I have a large raccoon in my back yard and I need to know the best way to release it once it is trapped. Do I cover the trap? I am concerned about being bitten. This raccoon has already broken an older trap by pushing out the wire door.

A
You should cover the trap with a dark sheet or a tarp for a while prior to the release so that the raccoon will be calm. Wear some heavy duty gloves to open the door. Practice opening the door a few times before you capture the raccoon so you will be familiar with the mechanism and can release the animal quickly.