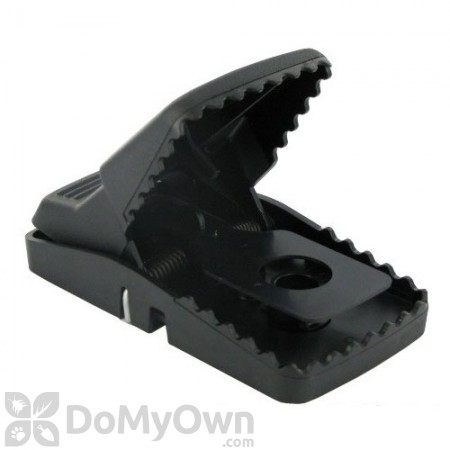 The Trapper® T-Rex Rat Trap  is a state-of-the-art mechanical trap that offers superior rat capture. Patented interlocking teeth make rat escape virtually impossible. With T-Rex you'll get the perfect combination of trigger sensitivity and trap velocity – speed and responsiveness that ensure a successful and deadly capture. Easy to set and safer to use than traditional snap traps, the T-Rex can be placed directly in a Protecta Rat Bait Station, or tied to pipes or beams that rats may use as highways. A bait cup in the center of the trigger pedal makes it easy to add baits including Bell's new Provoke Rat Attractant.

USE: Place trap along baseboards or in a corner for best results. You can use nuts, nesting material like a small piece of cotton, or small amount of nutella in the trap for bait.

Safer and easier to use than competitor's snap traps, Trapper T-REX can be readily set by foot safely on the ground. Press the trap open like a pedal, keeping fingers free and safe.

Bell included a removable bait cup that inserts from the bottom of Trapper T-REX. The cup can be withdrawn and re-inserted without the trap being set, which greatly enhances safety and ease of use. 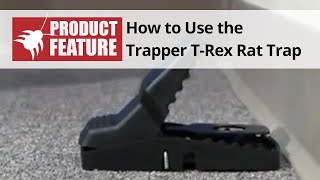 Have a question about this product?
Q
Best way to rid attic in our house of rats?

I don't want to use poison and have rotting rat carcasses in my attic.

A
The best way to get rid of the rats that are already in your attic is to trap them with rat snap traps, rat glue boards and/or live catch rat traps. We do not recommend using poison baits indoors because after the rats eat the bait they may go into an inaccessible area to die causing a terrible odor and possibly even a secondary insect infestation (it is a myth that there is a poison bait that will cause the rats to dry out and not smell or to leave the house in search of water). It is important that you place the traps directly in the rats travel path and bait them with an attractive bait such as nuts, dog kibble, canned tuna or peanut butter. Be patient, it could take several days or even a couple of weeks before the rats are comfortable enough with the traps to approach them and be captured. After you have eliminated your current infestation you must take the time to exclude rodents from entering your home in the future. Please take a few moments to read our article: How to Rodent Proof Your Home

90 of 99 people found this answer helpful

Q
Can the Trapper T-Rex Rat Trap be used more than once?
A

Yes, the Trapper T-Rex Rat Trap can be used over and over again.  In fact, once you catch a rat on this trap it will be even more effective because it will have the scent pheromone of a rat which is very curious to other rodents.

31 of 32 people found this answer helpful

Q
Will a rat visit the trap again once it is sprung?
A
Yes. Often times the pheromone left behind by rodents that have already visited the trap will help draw other rodents to it. Be sure to add fresh bait to help lure the rodents in. If you have a rat that has managed to set off the trap but did not get caught (very rare with the Trapper T-Rex Rat Trap) you may want to disguise the trap a bit to avoid a rat that is trap shy. You can simply place the trap inside of a shoebox with holes cut on either end to allow the rat to enter. This will look different to the rat and the rat will usually not avoid the trap inside.

Q
Smart rats: Can I adjust the sensitivity of a T-Tex Rat Trap trigger?

Last weekend, I placed six pairs of T-Rex traps, baited with Provoke, back-to-back on rat runways in my crawlspace, along with a dozen rat glue traps. Net result: 0 kills/captures, but the bait's been cleaned out twice. These rats are exhibiting a real nuanced touch, and a healthy appetite. Any advice?

The sensitivity cannot be adjusted, but if they are taking the bait and not tripping the Trapper T-Rex Rat Trap then usually this means you are putting too much bait in the bait cup.  You should place only 1 small drop in the bottom of the bait cup so the rodents really have to "get into the cup" and usually this will result in a set trigger.  You can also try a tiny dab of something a little stickier that may result in better results depending on the behavior of the rodents.

23 of 23 people found this answer helpful

Q
Is the rat dead inside the Trapper T-Rex Rat Trap? Is he maimed? How do you dispose of it?
A
Rats caught in the Trapper T-Rex Rat Trap are usually killed pretty quickly. How you dispose of the rat will vary from region to region, but in most cases you will simply squeeze the trap to release the dead rat directly into a plastic bag, seal the bag and toss in an outdoor trash can.

20 of 23 people found this answer helpful