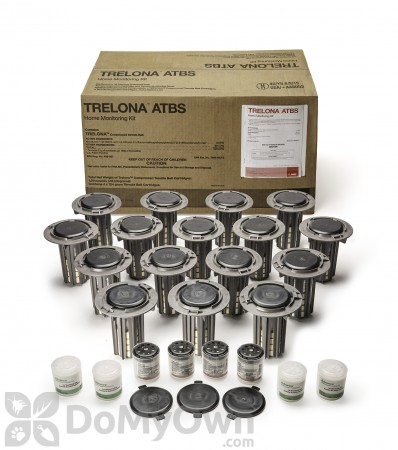 Trelona ATBS Home Monitoring Kit contains 16 monitoring stations. The Advanced Termite Bait System is the next generation in termite baiting. It is one of the most widely installed bait systems by professional pest control companies today. Unlike older bait systems, the Advance Termite bait stations have larger vertical slots that allow for maximum wood-to-soil contact, creating the perfect opportunity for termite attack. Each station contains TMB (termite monitoring base) that is made out of wood and a TIC (termite inspection cartridge). It will allow you to monitor and see if there are any termites. If there are termites, this kit comes with 4 Trelona TBC (termite bait cartridge) which can be inserted in place of the TIC. When this is consumed by a termite, it will impair the ability of a termite to properly synthesize chitin and disallow the termite to molt. By being unable to molt, they are not able to form a replacement exoskeleton. Termites will either die or are incapacitated by their inability to complete the molting process.

IMPORTANT: You will need to purchase a spider station access tool to open the stations if you do not currently have one.

This product is intended for use in an ongoing program of management and control of subterranean termite colonies in the ground around and under any type of building or other object (structure). It does not exclude termites from a structure. Instead, it suppresses or eliminates termite colonies. It affects termite colonies only if they consume it. Therefore, sufficient consumption of bait by all subterranean termite colonies that present an existing or potential hazard to the structure may, subject to the limitations stated herein, protect the structure against subterranean termite attack. If the cycle of pre-baiting and baiting around a structure is interrupted or discontinued, new colonies occupying the territory of suppressed or eliminated colonies, existing colonies that were suppressed but not eliminated, existing colonies never baited or colonies that were pre-baited may forage at points of possible entry into and infest the structure. For this reason, maintain the cycle of pre-baiting and baiting or offer continuous bait for as long as it is desirable to suppress or eliminate subterranean termites. If a soil applied - liquid or granular - termiticide treatment is performed in conjunction with an installation of the bait system, DO NOT treat in the area of installed stations (preferably not within 2 ft of stations). Because the use of bait may be a multi-step process, localized treatment(s) of areas of the structure infested with active termites at the time of pre-baiting or baiting, using soil applied termiticides may provide more immediate control of termites in those parts of the structure than bait. Preventative critical area soil or wood treatments may be performed in conjunction with station installation. DO NOT treat in areas of installed stations during routine pesticide applications.

To install a station, excavate or form a hole in the ground approximately the same size and dimensions as those of the station. Insert the station into the hole. Maximizing contact between the exterior of the station and the earth during installation will increase the probability of termite entrance into the station. If the station is inserted into an opening created through a hardened construction surface (such as a concrete slab, asphalt, etc.), insert station below the surface (in contact with the ground) and seal securely. Install stations at, or preferably within approximately 5 ft of points of known, probable or suspected termite foraging, and at other critical areas. Such areas may include areas with concentrations of cellulose-containing debris, such as mulch or wood scraps, in contact with the ground, areas of moderate soil moisture, shaded areas, areas containing plant root systems, bath traps, visible termite foraging tubes, etc. Install stations around a structure such that, except where sufficient access to the ground is not available, the maximum interval between any 2 stations does not exceed 20 ft. If the distance between 2 points of accessible ground around the structure exceeds 30 ft, it may be advisable to form 1 or more openings in the surface creating the inaccessibility to facilitate baiting between those points. If the structure has an accessible crawl space, stations can be installed in the crawl space in lieu of or in addition to installing stations around the structure; however, either the interior or the exterior of the crawl space must contain a complete set of stations, as defined by this label. Stations can be installed within a slab structure at existing or created openings in the slab surface through which ground is accessible and into which the station can be installed in a secure manner.

Have a question about this product?
Q
What is the difference between Trelona ATBS Kit and Advance Termite Bait System Kit?

Description for both says they come with TIC (termite inspection cartridge) and TMB (termite monitoring base) and both have Trelona bait included. I am confused, who made the Advance Termite Bait System Kit and how are these two different?

The Advance Termite Bait System Kit is being replaced by the Trelona ATBS. The components of either kit will fit both systems.

Is answer to question by Michael on 04/08/2010 obsolete, and traps can be baited initially, without monitoring bait?

1 of 2 people found this answer helpful

Q
Against what type of termites is Trelona ATBS Home Monitoring Kit effective?

I already bought taurus sc for a liquid treatment if i find activity. Can i just pour that on the traps that get hit? I also have a tree by my house that is infested. Do you have any suggestions on how to treat the tree to kill the termites as the tree is already dead.

The Trelona ATBS Home Montoring Kit is effective for subterranean termites. We advise NOT to pour the Taurus SC on top of the bait stations for treatment as Taurus SC is best recommened to be applied around the structure by trenching every10 linear feet with 4 gallons of the mixed solution to give you a residual control for up to 10 years. If the tree has been damaged by termites it would be advisable to remove the tree and perform a liquid termite soil treatment with Taurus SC to ensure subterranean termites to not find a food source inside of your home.

Q
Can the Trelona baiting stations be placed in a grassy area with sprinkler coverage?

I have grass in the yard. Grass covers to about 6" from the house. And also have grass next to patio.

The Trelona ATBS Home Monitoring Stations should be used 2-4 feet away from the structure and at least 10-15 feet apart. This should not affect the grass around your home and should not be placed in areas where it will come in contact with direct irrigation.

0 of 3 people found this answer helpful