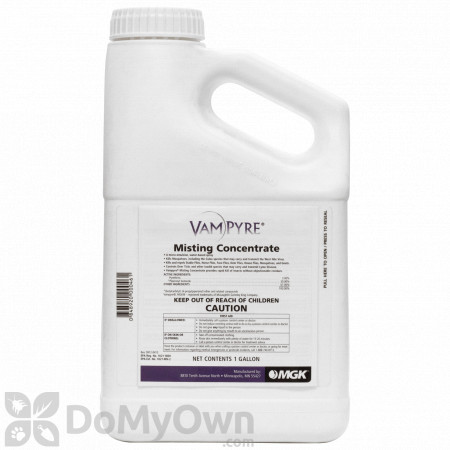 VamPyre Misting Concentrate is a micro-emulsion and water-based insecticide that provides control of over 85 insects. One of the features of VamPyre is that it has the maximum acting ratio of pyrethrum to synergist (1:10). It kills mosquitoes, as well as the Culex species that carries the West Nile Virus. This is an excellent product for killing house flies to stable flies and gnats. This will also control Deer Ticks and also additional Ixodid species that will carry Lyme Disease. It is the greatest solution to use for those hard to kill insect populations or where resistance to an insecticide is suspected.

VamPyre Misting Concentrate's water based formulation is not harmful to landscape plants. It is also ideal for use in food and non-food residential and commercial areas. The options of application are from a spray tank for surface application, space and crevice treatment by hand-held and mechanical foggers, to large commercial areas by automatic misting systems.

Test your water to ensure the pH of the misting solution is in the 5.5 to 7.0 range. If the solution is outside that pH range, pyrethrum will degrade, and performance will be reduced.

Place the misting system holding tank out of direct sunlight. Pyrethrum degrades at high temperatures. Cover the tank with a light-colored or reflective cover to minimize solar heating of the solution.

Be sure to clean the tank between refills, or use an anti-microbial to prevent the development of bacteria or other natural organisms that will break down the pyrethrum. Do not use compounds which could alter the solution pH out of the 5.5 to 7.0 range. If buildup is observed in the tank, empty it completely and be sure to clean it thoroughly before refilling.

Check and clean misting system nozzles and filters to be sure you are getting the particle size and distribution necessary to achieve good coverage. Apply during active periods Set the system timer to treat when target insects are most active, such as dawn and dusk.

Set the system timer to treat when target insects are most active, such as dawn and dusk.

VamPyre is labeled for the control of insects including, but not limited to:

Have a question about this product?
Q
Can VamPyre Misting Concentrate be used in a hand pump sprayer?
A

Yes, VamPyre Misting Concentrate can be applied with a sprayer.  Be sure to follow the application instructions on the product label.