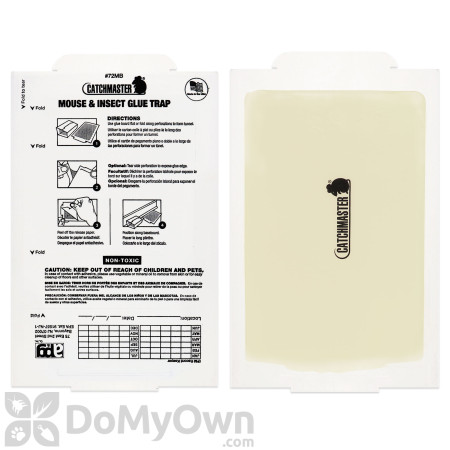 Catchmaster Mouse & Insect Glue Boards are made using the highest quality adhesive available. They are pre-baited and scented with peanut butter so they will automatically attract mice and insects, with no additional baiting necessary. These glue boards effectively control rodents and other crawling pests indoors in a clean, easy to use, and economical. They will work well for trapping crickets, spiders, roaches, snakes and many other common household pests. Are effective for one year and non-toxic to people or pets. Can be used as a standalone treatment or additional tool to baiting.

The Catchmaster 72MB is a non-poisonous cardboard glue trap that captures mice, roaches, and insects on contact. Catchmaster glue boards have no insecticides or rodenticides, and the 72MB has a peanut butter scent that acts as an attractant to mice. (This is a synthetic scent that contains no peanut allergens.) Glue will remain most effective in moderate temperatures, but not in direct sunlight or freezing temperatures.

Catchmaster Glue Boards are an excellent choice for the capture of mice, rats, and other small rodents and insects in the home. With no poisons, rodenticides, or pesticides, these glue boards use a special adhesive type of glue scented with peanut butter to stop rodents in their tracks. When it comes to pest glue boards, Catchmaster has been called the Duracell of Glues as compared to competitors glues that can become hard and rubbery after 30 to 90 days. The glue in Catchmaster glue traps is effective for at least one year and is not toxic to people or pets. They also contain no oil like other glue board products, as oil mixes with the body chemistry of the rodent allowing for escape. The low profile of these glue boards allows for easy placement of traps. Use the 72MB flat, or fold into a tunnel shape to protect from dust.

Glue boards may be used as a stand alone treatment measure for rodents or as an additional tool to baiting. If you know the rodents running paths, place a Catchmaster Glue Board wherever rodents have been seen to travel, ideally close to the wall in places not readily accessible to pets and children. If by chance a pet or non-targeted animal gets stuck to the glue trap, household vegetable oil may be applied for painless release. 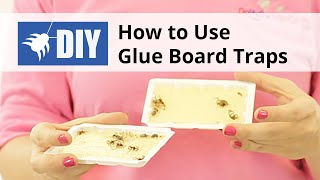 How To Use Glue Board Traps for Insect and Rodent Pests

Have a question about this product?
Q
My pet is stuck to a glue board trap! How do I remove the glue from my dogs paws?
A
The glue from Catchmaster Mouse and Insect Glueboard Trap can be removed using vegetable oil.  If you happen to get a lot of oil on your dogs paw getting the glue off, you can remove the vegetable oil by using Dawn or some other degreaser/cleaner.

Q
My dog ate one of the glue boards, will this harm him?

A
Your dog would have to eat "huge" quantities of the actual glue for there to be any risk of poisoning. As with any non-food item your dog consumes, you should monitor him to be sure everything he ingested passes through his system. If you suspect that the glueboard has not passed within a reasonable amount of time or your pet stops eating, you should contact your vet.

Q
How often should these Catchmaster Glue Boards be changed?

A
The glueboards will remain good for a length of time depending on where you place them.  They would need to be replaced if either the board becomes full with insects, or it becomes too dusty which will coat the glue and it will not be sticky.  Typically you would replace every 30 days.

34 of 35 people found this answer helpful

Q
What is the difference between Catchmaster glue boards and Trapper LTD boards?