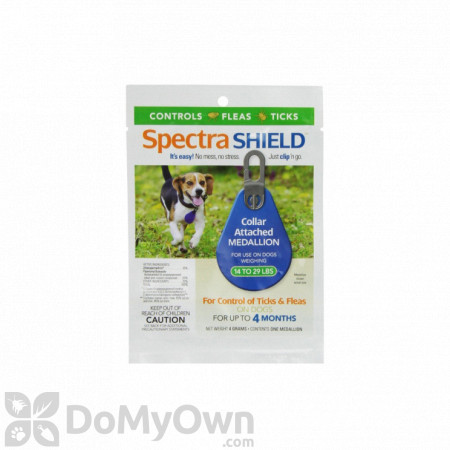 Durvet Spectra Shield is a highly durable collar-attached medallion that protects dogs against fleas and ticks for up to 4 months.  It is easy to attach and can be worn during bathing and swimming.  It contains zeta cypermethrin that is boosted by piperonyl butoxide for maximum effectiveness. The medallion slowly releases the active ingredients over time and continuously replenishes the dogs’ skin and coat.  Kills adult fleas and ticks at any blood-feeding stage.  For use on dogs 6 months and older.

This pesticide is extremely toxic to fish and aquatic organisms, including fish and invertebrates. Do not contaminate water by disposal of used collar medallion. Use this product only as specified on this label.

It is a violation of Federal law to use this product in a manner inconsistent with its labeling.

DO NOT USE ON PUPPIES LESS THAN 6 MONTHS OF AGE.

Remove medallion from package and attach to "D-ring" on existing collar.

The completed medallion must swing freely from the "D-ring" on the collar. Consult a veterinarian before using this product on debilitated, aged or medicated animals. If used on pregnant or nursing dogs, do not replace medallion until puppies are at least 6 weeks old. Sensitivity may occur after using ANY pesticide product for pets. Any pesticidal collar or collar attachment may irritate some animals. If irritation continues, remove the product from the animal. If signs of sensitivity occur, bathe your pet with mild soap and rinse with large amounts of water. If signs continue, consult a veterinarian immediately. As the Spectra SHIELD medallion is depleted of insecticide, ticks and fleas may be again noticed on your pet, indicating it is time to replace the attachment or replace the attachment after 4 months, whichever comes first. DO NOT USE ON CATS. The safety of this product has not been determined on cats.