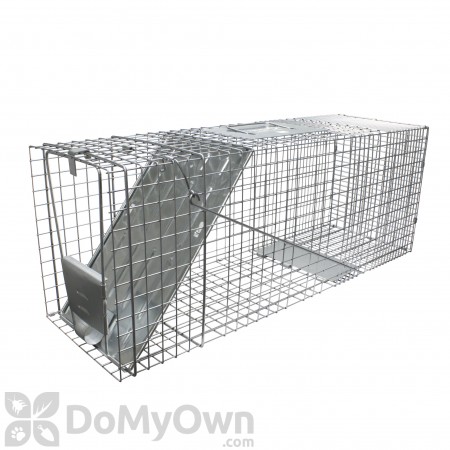 The Havahart #1079 cage trap measures 32" x 10" x 12" trap and is suitable for trapping armadillos, racoons and groundhogs (woodchucks). Easy to bait, set and release, this high tensil wire mesh trap is steel reinforced for long life and maximum resistance to damage. The smooth inside edges are for the protection of the animal, while the gravity-action door has sensitive triggers to ensure a quick, secure catch. Click on the "product label" link under the picture to the left for use instructions.

2 Door Trap The following tips should be used when preparing to live catch your nuisance animal.

Following the instructions contained in the carton, you may want to test the trap and spring it a few times to make sure that it works properly. For example, spring it by touching the trip plate from each end, This should be done also after the trap has been set and camouflaged to make sure it works freely. If you feel the doors do not work fast enough, place small stones or other weights on top of the door. This will cause doors to drop faster.

When you receive the trap it will be bright and new. Therefore do not be discouraged in case you do not catch what you anticipated the first night or day. The effectiveness of Havahart traps usually improve with age. Some animals do not mind a new trap while others do. So instead of setting the trap to catch the first animal to come along, bait the trap, or simply place it where you intend to set it and fasten the doors open by means of a stick or wire.

After a couple of days, when you notice the bait has been disturbed or taken, it is time to set the trap. Camouflaging the trap is an effective means to entice the animal. Place twigs and leaves all over the trap to remove a lot of the glare from the trap. You can even spray it with water and throw dirt on it to give it a conditioned look. Animals will not be discouraged from entering the trap by the smell of your handling the trap or from supposed machine/oil odors in the manufacturing process.

The following are good bait suggestions for groundhogs:

The following are good bait suggestions for raccoons:

Have a question about this product?
Q
Is Havahart Cage Trap Model 1079 a one-door trap?

I would would like to know if this Model 1079 Havahart animal trap is a one-door model or two? How do you release the trap door to let the animal out, without getting your hands so near the trap? It seems like a hard release, unless it is a 2-door trap.

A
The Havahart Model 1079 is a one door trap. Below is a link to a gentlemen using the 1079 and catching and releasing animals. He does a great job of visually showing folks what to expect. Youtube: http://www.youtube.com/watch?v=vAbMNccWR6M

4 of 9 people found this answer helpful

Q
How do I get rid of racoons?
A

You can try using Havahart Cage Trap to treat for raccoons to eradicate them from the area. We also provided different size trap as well as repellents on our site for complete control. Please contact us for further information at 1-866-581-7378.