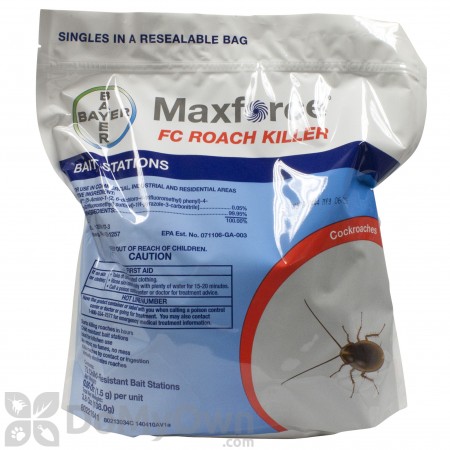 Maxforce FC Roach Bait Stations are all about fast control and secondary kill. Due to Fipronil and its accelerated Domino Effect kill, Maxforce Roach Bait Stations start to kill roaches in just eight hours. And field tests show 75% population reductions in just two days for roaches. The bait formula is that irresistible, and works that fast.

Fipronil is in the Phenylpyrazole family of insecticides and is used in many products when a delayed kill is desired, such as ant and roach baits. Fipronil disrupts the insect central nervous system, causing hyperexcitation of nerves and muscles.

It's also convenient and easy to use. The small roach station bags contain loose-packed single stations and are re-sealable to keep baits fresh and protected from contamination. Plus, the patented inspectable red station lids now have an additional feature: A debossed lid that's index welded to the base, creating even greater bait station integrity. And, the easy peel-and-stick adhesive makes application fast.

Our new fast control formula still gives you superior long-term control of roaches compared to contact sprays. The new active ingredient, Fipronil, provides a unique mode of action that works through both ingestion and contact, knocking down roaches that eat or simply touch the bait. Either way, one contaminated roach or ant kills many others where they live and breed. The Domino Effect still achieves population control, but with faster visible results.

Small cockroaches such as German and Brown-Banded

Maxforce FC Roach Bait Stations can be used in virtually any roach infestation of small roaches (do not use for large roaches such as Oriental roaches). Stations are ready-to-use and require no extra cleanup, so they require no maintenance except monitoring and replacing as needed. Maxforce FC Roach Bait Stations have a unique child-resistant design, so they can be used even in sensitive situations. Bait stations also protect the bait from contamination like dust or other debris. The included adhesive also makes stations easy to apply discreetly, in any orientation, for use in public areas.

Maxforce FC Roach Bait Stations are also labeled for exposed adults of a variety of stored product beetles and can be used in food/feed handling facilities.

Bait stations are the preferred formulation when harsh conditions exist in treatment sites that may compromise gel baits. Use stations where high moisture/humidity, temperature extremes or dust may reduce long term gel attractiveness. Examples of such sites include: dishwashing rooms; drop ceiling spaces; ovens and steam tables. Stations may also be a better long-term control choice in harborage sites that are difficult to service regularly, or may be sensitive to other formulations such as sprays and/or dusts. Examples of these sites include: inside appliances; vending machines, around electronics and in and around animal habitats.

Remove and dispose of infested foodstuffs. Clean up spilled foodstuffs from cupboard or food storage area. Once feeding on bait begins, most adult beetles will be killed within 7 days. Apply using the same rates outlined above.

Following is a general room-by-room placement guide for Maxforce Roach Bait Stations (Exact placement should be based on a complete monitoring and inspection. See our Indoor Roach Control Guide for images.):

Use stations adjacent to structure only. Applications protected from rain, direct sunlight, and other environmental impact will be most successful.

Have a question about this product?
Q
When does the Maxforce FC Roach bait stations need to be replaced?
A

The Maxforce FC Roach Stations can last up to 1 year if there is still bait left inside.  The stations have a translucent plastic top so you can see the bait tray inside.  In a bad roach infestation, roaches can eat the bait in as little time as 1 or 2 weeks.  You should replace the station once the bait is gone, or if you feel the station has become contaminated.  Otherwise, as long as there is still bait inside, it will be good for one year.

25 of 25 people found this answer helpful

Q
How do I get rid of German cockroaches in a car ?

i did the cleaning part, and ive been using sticky traps but i still see them around. what products do you recommend

A
You could use a roach bait station in your car such as the Maxforce Roach Bait Stations or the Advion Roach Bait Arenas. The roaches would eat the bait and share it with the other roaches and this will help eliminate the infestation.

17 of 19 people found this answer helpful

Q
Should Maxforce FC Roach Bait Stations be placed inside kitchen drawers - where the silverware is??

I am renting a house and previous tenent has bait stations right inside kitchen drawers. I have two children (ages 7 & 9 years old) and am especially concerned about poisoning not only roaches but people! Where should bait stations be placed in kitchens? Are they safe to handle when removing from walls and drawers?

13 of 13 people found this answer helpful

Q
What is the expiration date for MaxForce FC Roach Bait Stations if not used within 1 year?
A
There is no specific date of expiration given by the manufacturer. The manufacturer does recommend that you use the bait within one year of the date of purchase for maximum efficacy.

12 of 14 people found this answer helpful

I know they need replacing when the bait is gone. But is the bait the white stuff in the center, or the 4 black beaded lines? Thanks!

Maxforce FC Roach Bait Stations (72 count) should be replaced every couple weeks or when bait is gone. The actual bait is the white paste in the center.

11 of 11 people found this answer helpful