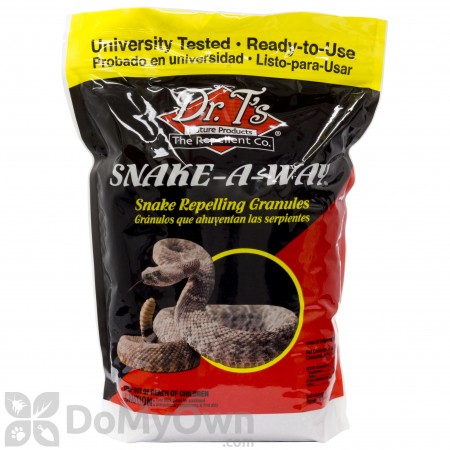 Snake-A-Way is the world’s only EPA registered, university tested, patented snake repellent that will effectively repel both poisonous and non-poisonous snakes. The Snake-A-Way dry granular mixture is easy to apply and can be sprinkled by hand around homes, trailers, cabins, camp sites, and garages, or wherever snakes repellency is desired.

Snake Away is effective for up to 3 months.

FOR OUTDOOR USE ONLY

To repel rattlesnakes (Genus Crotalus) and checkered garter (Thamnophis Marcianus) from areas around houses, cabins, trailers, garages, utility houses, barns, woodpiles, sand piles, trash cans, and flower beds. May also be used around the periphery of gardens. Do not use this product at sites where snakes are believed to be already present as the deterrent effects of the product might tend to confine snakes to the treated areas.

Do not apply this product in gardens or in fields of crops grown for food or feed. Do not use this product near streams, ponds, pools, or water supplies.

Tests of this product have suggested that it can be an effective deterrent for the types of snakes listed above.

While the product might deter other types of snakes as well, it is not expected to consistently repel snakes of the following types: corn snakes and other rat snakes (Genus Elaphe); and “moccasin” snakes such as cottonmouths and copperheads (Genus Agkistrodon).

How does Snake Away work?

Dr. T's uses knowledge of the snake's Jacobson's organ which controls a snake's sensory reception ability. As Dr. T's Snake-A-Way snake repellent's active ingredient vaporizes, it is brought into the sensory receptor (Jacobson’s organ) of approaching snakes and creates an immediate interference. The result is that the snake’s sensory system temporarily closes down, confounding the snake and scaring it into hasty retreat. This effect is only temporary, and the snake’s sensory functions will return to normal after the snake has retreated far enough away from the treated area.

How to Apply Snake Away:

Effectiveness test were conducted by Dr. Harvey Lillywhite, Professor of Reptology, University of Florida. Dr. Lillywhite is internationally recognized as one of the worlds leading research reptologists. Over ten years of independent research and follow-up tests were also conducted by Dr. T's Nature Products. Inc. The effectiveness of the repellent is demonstrated by the following experiments performed with various species and the product has been found to have a rate of efficacy that varies from 17% to 100% depending on the individual species.

In as much as the normal behavior of snakes is to move slowly in a deliberate and investigatory manner, the experments were devised to test the snakes responses to the repellent in as near to normal conditions as possible. In use, the granular product is spread on the ground across an area where it is desired to prevent or discourage snakes from entering. Preferably, the granules should be spread in a strip 10-30 centimeters wide, although generally the wider the strip the better. In this manner, an odor barrier is provided that snakes are reluctant to cross. Additionally, a smaller amount of the product may be scattered in a diffuse or non-continous manner just beyond the strip, on the side away from the area to be protected. This added scattering of the repellent serves to lessen the probability of occasional snakes wandering beyond the strip.

The principal conclusions from this study are as follows. (1) SNAKE-A-WAY repels snakes. (2) The efficacy of the repellent varies with taxon: some species are repelled with remarkable effectiveness, while other are not. How ever all species tested exhibit some degree of behavioral avoidance of the repellent. (3) There are circumstances in which individual snakes of all species tested will cross a strip of repellent, so the product cannot be regarded as an absolute barrier to these reptiles. Such situations are expected to be rare in natural environments, however, and (4) Use of the product can be expected to reduce significantly the occurrence of snakes within areas that are to be 'protected" by recommended use of the product. Typical behavior involved jerking the head away from the repellent after approaching it with the tongue flicks, then crawling away, often rubbing the sides of the head along the ground for a brief period. In one case the body of the snake started writhing after contacting the strip of repellent.

These behaviors were common and receptable, and they occured in some individuals as they approached the repellent from distances of 10-15 cm. Four snakes were re-tested two consecutive times, and all repeatedly avoided the repellent. In cases where snakes exhibited avoidance behaviors but nonetheless crossed the repellent strip. In various ways, it seems likely that a diffuse scattering of SNAKE-A-WAY pellets over the area beyond the strip would have caused the snake to eventually leave the area. Such procedure might also enhance the effectiveness of the product on substrates that are coarse-grained or uneven. Considering all the data, the fundemental conclusions regarding efficacy remanin the same. SNAKE-A-WAY should significantly decrease occurances.

Copperheads were strongly repelled by SNAKE-A-WAY, while the related cottonmouths were not. This result is interesting insofar as cottonmouths inhabit swamps and readily feed on carrion. It is possible that the sulforous smell of the repellent is normally encountered by the latter species, either in parts of the natural habitat or during carrion feeding, or both.

Have a question about this product?
Q
It Snake A Way harmful for dogs?
A

Snake A Way is not harmful to dogs, although, some may dislike the odor.

13 of 15 people found this answer helpful

Q
Is the odor of Snake A Way harmful to humans?
A

Snake A Way is not harmful to humans if used as directed.  Snake A Way uses a variety of natural ingredients designed to irritate the smell and taste and passages of snakes to deter them from the area.

11 of 11 people found this answer helpful

Q
If snakes can't smell, how does Snake A Way work?
A

Snake A Way uses knowledge of the snake's Jacobson's organ which controls a snake's sensory reception ability. As Dr. T's Snake-A-Way snake repellent's active ingredient vaporizes, it is brought into the sensory receptor (Jacobson’s organ) of approaching snakes and creates an immediate interference. The result is that the snake’s sensory system temporarily closes down, confounding the snake and scaring it into a hasty retreat. This effect is only temporary, and the snake’s sensory functions will return to normal after the snake has retreated far enough away from the treated area.

6 of 6 people found this answer helpful